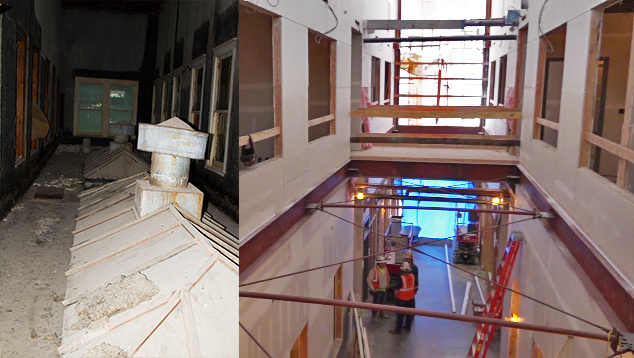 With only a few months left until the renovation of the Grand Old Post Office is complete, crews are finishing up rooms and common spaces at OSU Institute of Technology’s newest student housing facility in downtown Okmulgee.

The Grand Old Post Office, or GOPO, was originally a two-building complex on the northeast corner of Grand Avenue and Fifth Street constructed in 1918 and 1919.

Nearly a century later, the buildings will have a new life. OSUIT purchased the former post office and its adjacent building in 2015. Construction began in late 2016 with crews painstakingly working to turn the complex into downtown student lofts adding modern systems to the building while also maintaining as much of the original structure’s character and reusable materials as possible.

OSUIT President Bill R. Path said the first floor was completely gutted during the early demolition phase. It has been completely transformed from narrow retail spaces into a well-planned residential complex, while the second floor has maintained many of its original corridors and much of its period look.

“To walk through the building today is a delightful experience compared to a year ago. There is absolutely no comparison,” Path said.

The project is scheduled to be complete by fall 2017 and will become the new home of 75 students in January 2018.

Recently, the student housing project was nominated for an Associated Builders and Contractors’ Excellence in Construction Award, a national award that recognizes the country’s most innovative and high-quality construction projects.

Brian Park, job superintendent at Flintco, said it’s quite an honor to even be nominated for the ABC award.

“It’s a tribute to all the hard work that hundreds of people have put forth and a tribute to all the determination of so many,” Park said. “It lets everyone know that OSUIT has gone above and beyond for their students and the community. It also shows respect to the design team and all the contractors who have worked long hours—hot and hard days— to bring a grand structure back to life and help revitalize downtown Okmulgee.”

Path said he is honored the project has garnered the attention and respect of those in the industry across the country.

“OSUIT is proud of what our partnership with Oakridge Builders, a division of Flintco, has produced and gratified they have been nominated for this prestigious award based on this project,” he said. “This unique renovation project has been the perfect mix of visionary planning, inspired design, economic stimulation and skilled construction.”

For Park, supervising the GOPO renovation project is unlike anything he has ever done before in his career.

“I have done a restoration before, but by no means have I worked on a project like this. I doubt anyone has,” he said. “We are taking a century-old building and making it into something is was never quite meant to be. It’s been quite the undertaking, and, through all the struggles, it’s shaping up to be a unique and astounding structure.”

One of the goals of offering student housing downtown is that the students who live in the new facility will bring even more life and revitalization to the growing and changing historic downtown Okmulgee.

And while there is a capital campaign component to this project, Path said this renovation is primarily being funded as a master lease project with all construction debt being retired by funds available to OSUIT through our ongoing student housing operations.

“Essentially, this is student rental income being reinvested into additional student housing. There are no state tax dollars going into the renovation or future operation of this student housing complex,” he said.

The GOPO building will not only help meet the need for additional student housing, but give students a one-of-kind option when it comes to where they will live while working toward their degrees at OSUIT, Path said.

“Oakridge Builders deserve special recognition for their work. Their team has painstakingly introduced modern engineering and integrity to this 100-year-old structure while carefully protecting its historic beauty and charm for future generations,” he said. “Thanks to their supportive efforts, a symbol of decline has become a symbol of hope for this community. Two buildings that would have been lost to time have become the showcase of downtown Okmulgee, with renowned purpose and ready for another century of use.”

Stay up to date with the latest news about the GOPO renovation project by visiting osuit.edu/gopo.