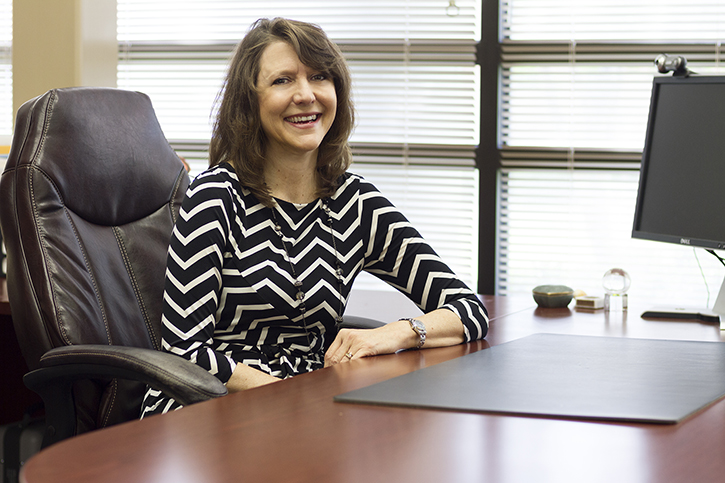 After more than 26 years at OSU Institute of Technology, Executive Vice President Anita Gordy-Watkins is retiring at the end of September, but it won’t mean the end of her career in higher education.

“I’ll probably never really retire,” said Gordy-Watkins, who will begin working as the new Associate Vice Chancellor for Global Economic Development at the Dallas County Community College District. “This was a unique opportunity that came about. Working on international expansion and economic development, those are my loves.”

But the choice to leave OSUIT was truly difficult and still brings tears to her eyes.

“This is by far the hardest decision I’ve ever made in my life,” Gordy-Watkins said. “It’s always the people, that’s what makes the difference in your life. I’ve been very, very lucky, very blessed.”

Gordy-Watkins started her career at OSUIT in the economic development and workforce area as a training and project coordinator and soon found herself in the director position. She worked to form and lead what is now the School of Engineering Technologies before moving into the role of associate vice president of university and external relations, what is now called institutional advancement.

She also worked to open the Advanced Training Center at MidAmerica Industrial Park in Pryor in 2000 that primarily focuses on training for careers in manufacturing and industrial maintenance.

OSUIT President Bill R. Path said Gordy-Watkins has been one of the university’s most talented and valuable resources over her 26 years working on countless projects.

“She has been a tireless champion for the cause of career and technical education within the state of Oklahoma, and many constituents have been enriched by her efforts to build statewide coalitions,” Path said.

In 2003 she was named vice president of institutional advancement and a few years later began working to bring a more international presence to campus.

“So many of our students work globally. Even if they don’t work overseas, they do work with global companies and entities, so to offer our students an international facet of their education was important,” Gordy-Watkins said.

In 2014 she moved into the executive vice president position while still retaining the responsibilities of institutional advancement that included economic development, workforce training, grants, institutional research, and marketing and communications.

“I really like new and innovative things, I like building relationships between the university and our partners, finding things we can build on and things that advance the institution,” she said. “My job has always evolved. Workforce and economic development is always changing. I’ve never been bored.”

Path said Gordy-Watkins’ clearheaded approach to problem solving and her strategic thinking abilities made her an invaluable member of his and past presidents’ administrations.

“Her kindhearted nature and contagious enthusiasm for her work has endeared her as a trusted friend, mentor or confidant to nearly everyone within the OSUIT campus community,” he said. “Anita’s considerable contributions to this institution will be remembered for years to come.”

Gordy-Watkins said she’s never felt like a traditional administrator, but then again, OSUIT has never been a traditional university.

“We’re unique and  all of the presidents I’ve worked with have understood that. It’s been a blessing to work in that kind of environment and to take advantage of our niche,” she said. “I’m proud of the niche OSUIT has in the state and the nation and the world. We are sought after globally.”

Now Gordy-Watkins has the opportunity to take her talents and experience to a brand new position, but it’s a bittersweet end to her time at OSUIT.

“We’re such a friendly and welcoming campus. You don’t appreciate it and don’t really think about it until you think of leaving it. At this campus the people pull together, team together and make things happen,” she said. “I’ll always be an Okie, I’ll always bleed orange. I grew up at OSUIT.”