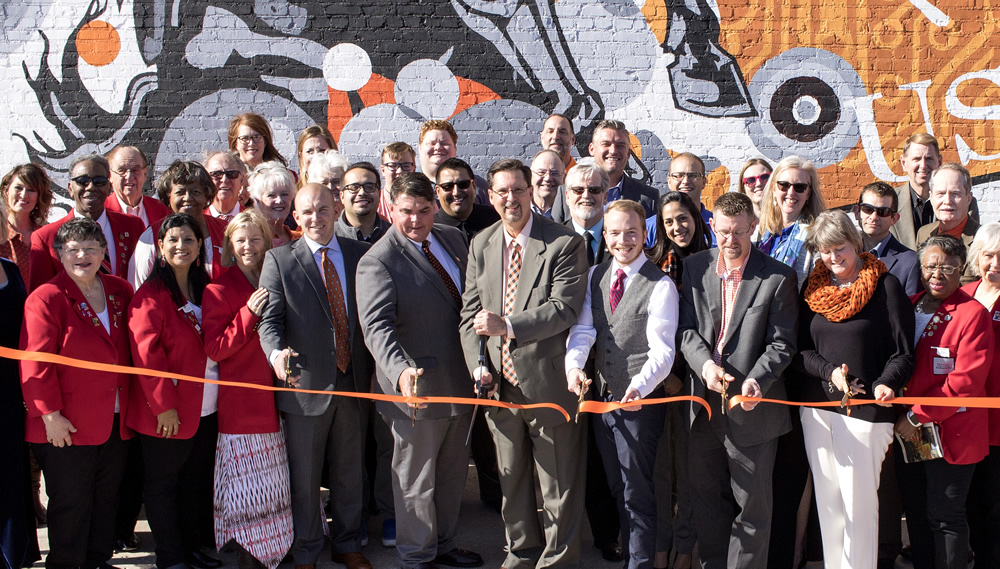 The OSUIT Grand Old Post Office Student Housing, a project that took nearly three years to complete, opened its doors to the public Tuesday after a grand opening dedication and ribbon-cutting ceremony.

The Grand Old Post Office, or GOPO, is the newest university housing option for students attending OSU Institute of Technology, but it’s no ordinary residence hall.

The GOPO is located in downtown Okmulgee at the corner of Grand Avenue and 5th Street. The loft-style housing was originally a two-building complex built in 1918 and 1919. The earliest building was the home of Okmulgee’s first post office.

After several years of planning, design, construction and restoration, the 38-unit building, which can house 75 students, was opened to the public to witness the extensive renovation before students move in on January 3.

A standing-room only crowd participated in the building dedication before hundreds of Okmulgee residents, OSUIT employees, and future tenants toured the GOPO’s lofts and flats—no two alike. The tiled lobby with grand staircase, community kitchen, two-story light wells and unique common areas were featured spaces of the tour.

“This project has been an absolute joy to work on. It’s a true joy to turn it over to the community to show it off,” said OSUIT President Bill R. Path. “When we first toured the building there was nothing grand about it, but now it deserves the name ‘grand.’”

Architects and construction crews went to great lengths to preserve, restore and reuse as much of the original building as possible.

Throughout the GOPO, elements of the nearly century-old structure remain such as doors and doorframes, post office boxes and exposed brick walls within the apartments. Other elements were repurposed including skylights, sliding firewalls and lumber and ceiling slates.

David Lawson, from Flintco Construction, was the project manager and said the GOPO project was unlike anything he’d ever worked on. And like some in the community, he had his doubts it would work.

“When I walked in the building for the first time last June, I had my doubts about what we could and would be able to do. When I think back to where we started, I realize how far we’ve come,” Lawson said. “This project kept us on our toes. I’m incredibly proud of what we’ve accomplished. It was an awesome and once in a lifetime experience.”

The entire project, from purchase to completion, cost $10.5 million.

“Not a single dollar of taxpayer money was used in this building,” Path said, adding that student rental income as well as private funding will pay for the project.

Mark Mabrey, vice president of lending at Mabrey Bank and chairman of the OSUIT PROUD Campaign said a lot has changed in Okmulgee in last few years as a spark of excitement and revitalization has hit the community, due in large part to OSUIT’s investment in downtown.

“I’ve never seen so much orange in Okmulgee,” Mabrey said. “As an Okmulgee native, I just want to say how proud I am of OSUIT and the Okmulgee community. It’s a large step toward becoming a vibrant community.”

Currently the OSUIT PROUD Campaign has raised $2.9 million of its $3 million goal with donations still being accepted through the end of December.

Choosing to have OSUIT’s next student housing complex located in downtown Okmulgee and not on campus was not a decision taken lightly, Path said.

“This was not a simple project. If we had spent the money on a residence hall on campus, we would have fixed our student housing issue, but we wouldn’t have helped the community. It wouldn’t have spurred development of new downtown apartments and restaurants and businesses,” he said. “The town needs our students, and the students need our town.”

Okmulgee Mayor Steve Baldridge said the GOPO is a great example of the Okmulgee Rising movement.

“This is a beautiful building that is ready for the next 100 years. OSUIT is a life changer to thousands of students, and we want to be a part of that,” Baldridge said. “We welcome OSUIT to downtown, the heart of our community.”