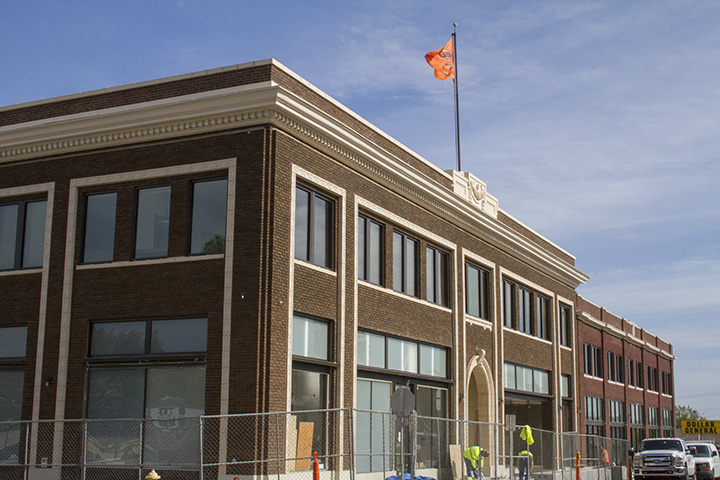 What was once the city’s post office has now been completely renovated into the Grand Old Post Office, the university’s new loft-style student apartments, and is ready to open its doors to visitors.

The grand opening of the Grand Old Post Office Student Housing is set for Tuesday, Nov. 28. A private ribbon-cutting ceremony for invited guests is scheduled for 10:30 a.m. The building will officially open to the general public beginning at 11:30 a.m. and visitors are welcome to come and go for an exclusive preview of the building’s impressive features. Semi-guided tours will be offered throughout the day and evening; the last tour will be offered at 8:30 p.m.

OSUIT President Bill R. Path said he’s eager to see the GOPO open and available to the public to walk through.

“I’m quite excited to share it with others. People want the opportunity to come and see it,” Path said. “It’s fun to have it open to people who have watched it from afar.”

The building, which can house 75 students and a building manager, will welcome its first residents in January 2018.

One of the goals of the project was to utilize as much of the original building as possible. Barn and fire doors are used as decoration; original skylights have been repurposed as light fixtures as well as doors, doorknobs and fixtures.

“It’s beautiful and gorgeous again. I’ll derive a lot of pleasure seeing people’s eyes as they see this building like it’s brand-new,” he said.

Path said he knows when the project was first proposed there were some who questioned whether it would really happen, but many have watched the progress of the GOPO building and are now believers.

“Many people have been won over. We’ve been able to deliver on what we promised,” he said.

And Path said he hopes the GOPO renovation is just the latest in revitalization efforts in Okmulgee.

“Many people are beginning to realize this project is one of the most important projects in recent Okmulgee history,” he said. “I’ve been saying the building is making a statement and that statement is OSUIT has not given up on Okmulgee and we’re refusing to let Okmulgee give up on itself.”