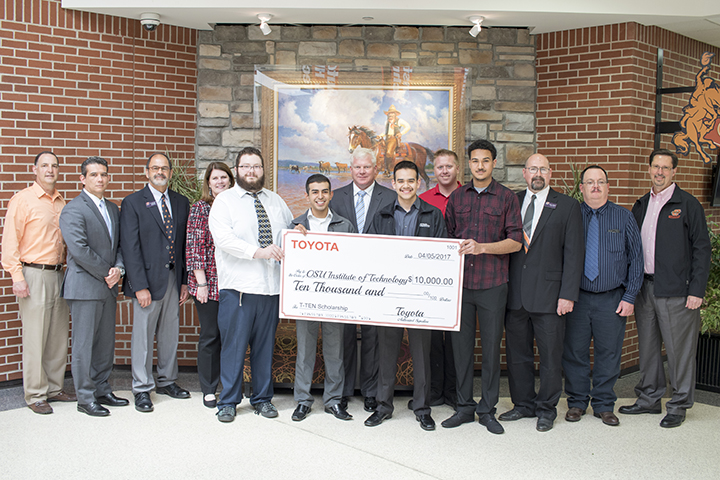 This partnership between Toyota and OSUIT allows students to secure internships with Toyota dealers before entering the school’s Toyota T-TEN program. They earn an associate in applied science after two years of working on the latest Toyota and Lexus vehicles; learning about transmissions and transaxles; suspensions; noise vibration and harshness; brakes; electrical and electronic systems; automatic climate control; electronic fuel injection; engines; and computer control systems.

Students are taught by OSUIT faculty with years of industry experience as well as Toyota-certified professionals and dealership mentors.

Guillermo Lopez is workforce development manager for Gulf States Toyota, which serves all Toyota dealerships in Oklahoma, Texas, Arkansas, Mississippi and Louisiana. He said OSUIT is one of only 37 schools in the U.S., that hosts the Toyota T-TEN program, including five in the Gulf States region, and is the only Toyota T-TEN program Oklahoma.

“Our goal, in partnership with our dealers, is to support the programs that create tomorrow’s Toyota technicians,” Lopez said. “T-TEN is our No. 1 resource for recruiting qualified technicians. OSUIT recruits students across the state of Oklahoma and is doing an outstanding job. We’ve had great feedback from Toyota dealers and the students.”

Leo Van Delft, dean of the School of Automotive Technologies, says 218 students have graduated from the program at OSUIT, with five more scheduled to graduate in August and another 18 next year. He added that several of the program’s alumni have risen to leadership roles such as service managers while others have become Toyota T-TEN educators.

“We are so grateful to Gulf States Toyota, Fowler Toyota and Jim Norton Toyota for everything they do to support our students,” said Bill Path, president of OSUIT. “The Toyota T-TEN program has helped OSUIT students establish successful careers for decades. With the addition of these scholarships, OSUIT students will be able to graduate with less debt, a job, and the skills needed in order to be successful in their chosen career.”

Tags
Toyota T-TEN
Back to Top
©