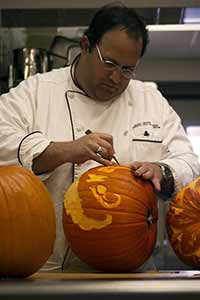 Looking at past carvings by School of Culinary Arts instructor and alumnus Jason Marsh, many would assume he’s been carving intricate flowers and scary faces for years. And they would be wrong.

Marsh said he’s only been serious about fruit and vegetable carving for less than two years. In fact for Marsh, carving was a difficult skill to learn at first.

“It all started a couple years ago. A couple ladies from Thailand were here teaching Thai-style carving. It wasn’t connecting with me,” he said.

He finally decided to pick the carving knife back up after discovering one of the women had left him a beautiful rose carved from a bar of soap.

“I said ‘I got to get this’ so I got a melon. I started hacking at this melon one day. I watched some carving videos on YouTube, I read books,” Marsh said until he had carved that rose. “It was an epiphany. I got the rose so I started branching out to other flowers, other fruits. I was teaching myself how to do it.”

Last fall he took the opportunity to learn how to carve pumpkins. Once again he turned to videos and books as his guide, this time by renowned carver Ray Villafane.

Marsh’s pumpkins were so popular that he’s been commissioned to do many more this year, including some for a wedding and a baby shower in addition to those he will carve for events around campus.

Two of his pumpkins were featured at the School of Hotel and Restaurant Administration table at OSU’s Homecoming celebration in Stillwater this year.

“ It’s an art form in and of itself. It was a lost art form for awhile, now it’s making a resurgence,” he said.

This year Marsh created an elective class where students learn basic carvings and garnishes of fruit and vegetables.

“It’s a big learning experience for myself as well,” he said, but he said it’s a marketable skill for culinary students. “Why not let our students be versed in it?”

“It’s a focus factor. It’s just me and the carving. I don’t have to think about anything else,” he said. “You have to look at it like an artist.” 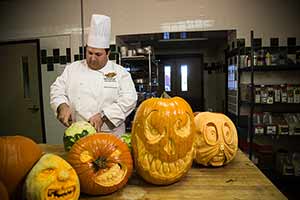