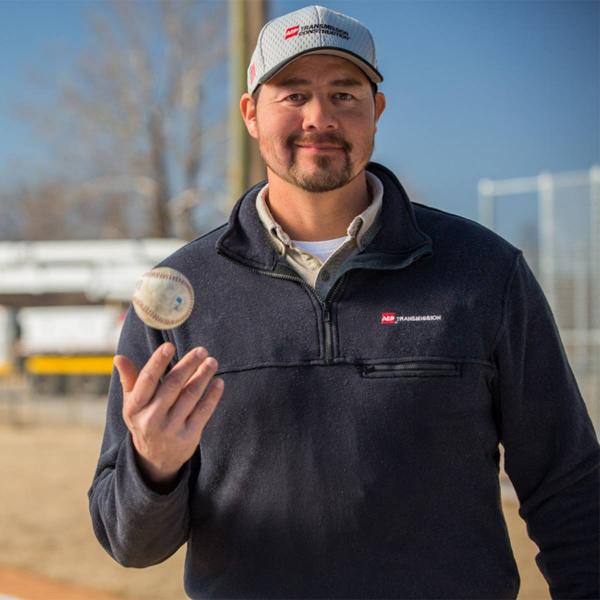 Seeing the aftermath of storms is nothing new to Kendall Kihega, a transmission lineman for AEP-PSO. But in March 2015, when he saw the damage a tornado left behind at municipal baseball fields used by children in Sand Springs, he knew he wanted to help.

“I have two daughters. Any time you have an instance where kids are involved, it’s going to strike a nerve in anybody,” said Kihega, who graduated from OSU Institute of Technology’s High Voltage Lineman program in 2012. “Anybody and everybody should take the opportunity to help when it’s presented.”

Kihega along with five other linemen and two foremen spent an afternoon removing damaged wooden lighting structures and installing new ones. AEP-PSO donated the materials, provided the equipment and coordinated the volunteer effort.

“At the time the fields were so badly damaged there wasn’t a field that was usable,” he said. “They needed to play, but they couldn’t until the fields were fixed and the lights were up.”

Stan Whiteford, communications manager for AEP-PSO, said it’s important that AEP-PSO’s 545,000 customers across Oklahoma know that the company cares about the cities and towns it serves.

“Employee volunteerism is a part of our culture here at AEP-PSO. We encourage employees to be engaged in the communities we serve, and we actively work to coordinate activities that give our employees those opportunities,” Whiteford said.

After the baseball field project was complete, the AEP-PSO employees who volunteered to help with the restoration were recognized at a town hall meeting in Sand Springs.

“They presented us with a certificate. That was very nice. It wasn’t anything we expected,” Kihega said, but the attention didn’t stop there.

He was one of several employees who volunteered their time who were interviewed by AEP-PSO about their community service.

“Two or three months later they told us they were going to do a commercial. It’s the first time I’ve ever done something like that,” he said. “I had a lot of response from my instructors over there at OSUIT.”

His Associate in Applied Science in High Voltage Electricity was actually his second degree from OSUIT’s School of Construction Technologies. Kihega graduated from the Air Conditioning & Refrigeration program in 1995.

“I had a great time— one of the best decisions I ever made,” he said.

Kihega decided to change careers after talking with friends who worked at AEP-PSO.

“I’ve always been interested in working outside, working with my hands. I like problem-solving,” he said. “The guys who work in high voltage have to really love what they do. It’s all I’ve ever wanted out of a job.”