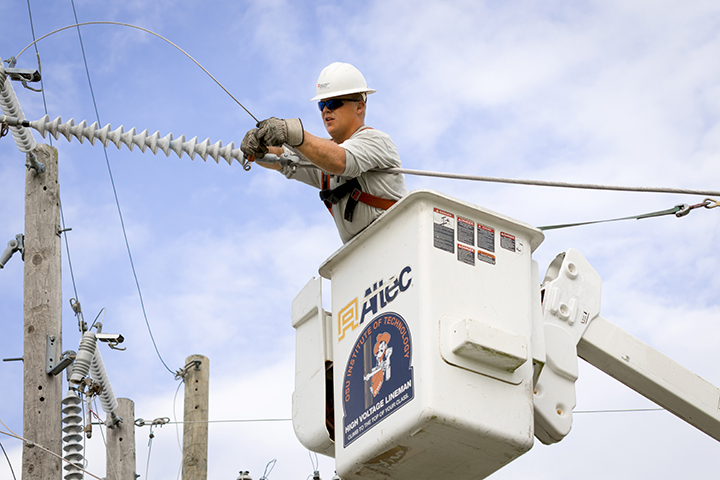 The Houston area, and now almost the entire state of Florida, have recently been devastated by hurricanes Harvey and Irma leaving millions of people without power.

First responders and lineman crews from across the country have mobilized to help those areas including OSU Institute of Technology students and alumni from the High Voltage Lineman program.

Ryan Mudd was about to finish his summer internship at AEP when Hurricane Harvey hit Texas’ Gulf coast.

“I asked the supervisor if I could go down and work,” Mudd said. “The weekend it hit, we were headed down there.”

Mudd and the crew he was with were sent to the Corpus Christi area right on the coast.

“They can tell you how it will be, but you can’t understand it until you see it. There were lines down as far as you can see,” he said. “It’s eye-opening. We have tornadoes here, but hurricanes are just widespread. That magnitude, it was just destroyed.”

Nick Selvidge is a High Voltage Lineman alum who graduated in 2006.

“Hurricanes are a little different. We know it’s going to be more widespread and we’re going to be down here for a couple of weeks,” Selvidge said while heading down to the Houston area just two days after Hurricane Harvey made landfall.

“We’re heading down to ground zero,” he said. Once crews arrive, a plan is made and crews are assigned areas to respond to. “Then we just work steady.”

Selvidge has been part of crews sent to help with storm responses after hurricanes Katrina, Rita and Gustav as well as several ice storms but said you never get used to the devastation.

“When you first get the call, you don’t know what you’re going to get. You can see it on TV, but until you’re there, you don’t really know,” he said. “You never get used to it. It’s not a routine thing. You don’t get used to storms like that.”

This was the first natural disaster Mudd has ever worked and said oddly he liked it.

“Everyone working to get stuff done. You look, and there’s 200 to 300 people working one town,” he said, and the residents were glad to see them. “You had people driving down the road handing out burritos to us. The locals were real good. I don’t think we saw one angry customer. You know it has to be frustrating, but they didn’t show it.”

Going to areas when most people want to get out is just part of the job, Selvidge said.

“We knew what we signed up for,” he said, but it’s great to see the lights come back on and residents back in their homes because of the work they did. “It makes it worth the while. Seeing how people are hit real hard, you realize how lucky we are.”