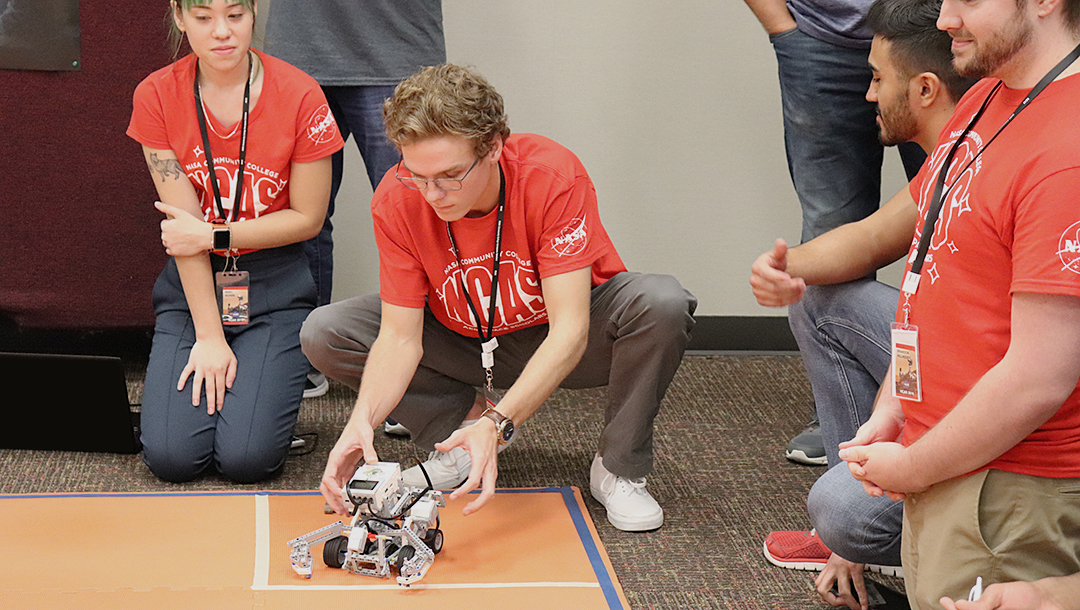 OSU Institute of Technology student, Ariel Adams, is shooting for the stars when it comes to her future career in Information Technology as the first OSUIT student to attend the National Aeronautics and Space Administration (NASA) Community College Aerospace Scholars program.

Adams, born in Yokosuka, Japan, is an online student enrolled in the Information Technologies program at OSUIT.

Wanting to work for NASA since she was a young girl, her interest was sparked when she learned about the opportunity. She said that even though she is open to opportunities outside of NASA, her dream job would be to work on a project for NASA that involves artificial intelligence.

“At the beginning of my education, I was interested in working for the Federal Bureau of Investigations to utilize my skills in cybersecurity,” said Adams. “As I took more classes in the software development option, I developed a passion for programming and wanted to expand my knowledge in programming by studying AI for my master’s degree.”

NASC, a program made specifically for community college students pursuing a STEM career, provides students an authentic NASA experience and encourages them to finish a two-year degree or transfer to a four-year university to pursue a NASA-related field or career.

The program consists of a five-week online course and ends with a final project. The course provides information on NASA’s history, current missions and possible future plans. It also gives students a chance to talk to NASA’s scientists and engineers in the weekly webinars.

The online portion covered topics outside of just space exploration with topics such as the 2020 Mars campaign, climate change and aeronautics. They also got to meet and talk to NASA scientists and engineers in the weekly webinars.

Based on the grades of the course and project, students are selected to attend an on-site event, at a NASA location or a community college. Adams was sent to the Redlands Community College in El Reno, Oklahoma for three days where she was placed into a group to participate in a robotics competition.

At the on-site event, they were placed in four groups who each had to create an engineering company that presented NASA with a rover. Each group designed and programmed a rover, managed finances, and marketed outreach programs of the company.

She also learned about many companies involved with NASA, including a local company in Oklahoma that provides NASA with equipment that will be used in their missions, such as Motor Controller Interface units which are made for the ISS.

“My favorite part was listening to the journeys of current NASA employees and other college students,” said Adams. “As a two-year college student, I often feel less than other students who attend more recognized universities. After completing the program, my perspective changed, and I now have more motivation and confidence in myself and the program. I realized that it is possible to work for NASA without having a degree from an Ivy League university. All it took for me to accomplish this was to put myself out there and not give up.”

Adams’s experience didn’t stop at that. Not only did she win two awards, one for her team winning the robotics competition and the MVP award, which is given to one student for every group, she was also offered an internship at NASA for the spring semester.

“I was always aware of the internship, but I was exposed to it in more detail at the NCAS program where I meet students who transitioned from NCAS to an internship,” said Adams. “After the program, I applied for several internships NASA provides and received an offer for a spring internship from NASA.”

The project she will be working on is called Improvement of 3D graphics within a State-of-the-art Graphical User Interface.

“I will use Python and Java to improve the GUI for NASA's GlennHT code,” she said. “The code is a flow solver that can simulate flow and thermal field in complex geometries that occur in situations such as in gas turbine engines.”

Adams’s internship will take place Jan. 13 through May 1, at the Glenn Research Center in Cleveland, Ohio.