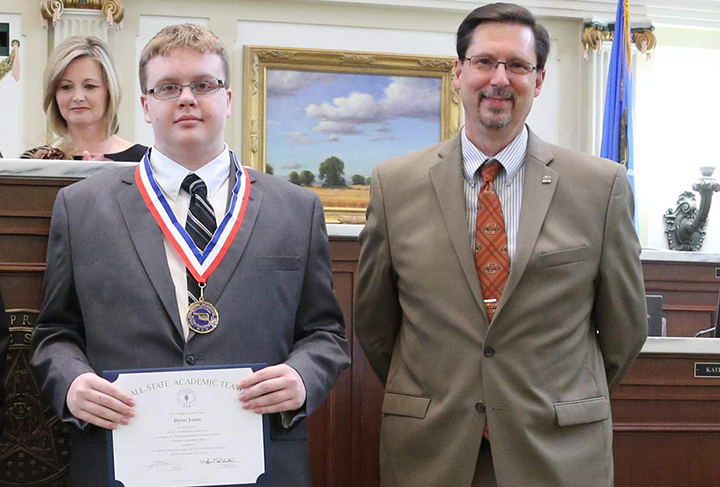 For a lot of students who earn accolades and national recognition, especially from a school with a smaller campus like OSU Institute of Technology, it can seem unreal.

The same was true for Information Technologies student Dylan Jones when he received the email in March congratulating him on being named to the 2017 All-Oklahoma/All USA Academic Team.

“At first I thought it was malware,” Jones said with a laugh. “It had been such a long time since I had applied. But then I realized I had been accepted.”

Jones is working towards an Associate in Applied Science degree in Information Technologies and then wants to pursue a Bachelor of Technology degree from OSUIT. He already earned an Associate in Science in Business from OSUIT’s School of Arts & Sciences.

“I got a business degree, but it didn’t interest me as much as I thought it would,” he said, so he decided to look into the information technologies field in part because his father works in the industry.

“Programming is what I enjoy. Networking has its challenges,” Jones said.

Michael Hass is an Information Technologies instructor and has enjoyed having Jones in his classes.

“Dylan is a good man that not only excels in the classroom but also works to make the campus and community a better place,” Hass said. “As a student, Dylan strives to complete all requirements and will ask questions where needed. He gets the job done.”

Jones grew up in Okmulgee and knew a little about OSUIT before deciding to enroll.

“I liked the affordability, and it’s a good program. You learn a lot of technical knowledge,” he said. “Being on a smaller campus is nice. It lets me get out and walk everywhere. Not having a vehicle, it makes it easy to get around campus.”

Jones is also a member of the Phi Theta Kappa honor society, which is where he heard about the All-Oklahoma/All-USA Academic Team.

He and the other 38 students selected for the honor were recognized at the Oklahoma State Capitol on March 28. It was Jones’ first trip to the Capitol building.

“We met our representatives and senators. It was an amazing time,” he said.