Internship Leads to Scholarship Win for IT Student

Internship Leads to Scholarship Win for IT Student 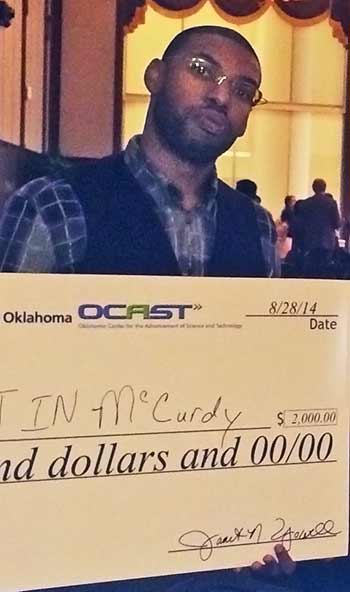 Martin McCurdy, who is pursuing a Bachelor of Technology in Information Technology, turned his recent internship into a winning research project and a $2,000 scholarship.

McCurdy, who interned at Tulsa-based True Digital Security, is now working there full time and is finishing his degree by taking courses online. He is set to graduate in summer 2015.

With three generations of his family from Okmulgee, and a parent who is also an alum, McCurdy said he knew about OSU Institute of Technology, but didn’t realize it offered the program he was looking for until he started researching ABET accredited IT programs.

“When I found a program just a few miles from house, it was an easy decision,” he said. “My father went to OSUIT and graduated from there in 1980. He used his degree as a springboard to get hired in the oil and gas industry.”

Karla LaMunyon is the advisor of the Association of Information Technology Professionals and got to know McCurdy when he served as vice president and then president of the OSUIT student chapter.

“He has always put 150% into everything he has done,” LaMunyon said. “He would always take the initiative to make sure he completed a task to the best of his ability.”

While on his internship this past summer, McCurdy was encouraged by his supervisors at True Digital Security to apply for the Oklahoma Center for Advancement of Science and Technology intern scholarship program.

The first step was to write a paper on what he did during his internship, how it helped his education and how he will now help Oklahoma.

“Everyone at True Digital Security was supportive,” he said.

A few weeks later he learned he was a top three finalist and would present his intern research project at the third annual Oklahoma Technology Showcase.

McCurdy did his research project on a specific compliance in the payment card industry and the different methods of compliance.

He feels so strong about this issue, McCurdy said he was more focused on his presentation than on the scholarship possibility.

“The thing I wanted most was to do my best in the presentation. I was focused on relaying a message and bringing awareness to security,” he said. “I guess they were impressed.”

Those judging the presentations were impressed because McCurdy took second place and was awarded a $2,000 scholarship.

LaMunyon said McCurdy is a great representative for OSUIT and will continue to succeed in his career because of his strong work ethic and passion for helping people.

“McCurdy is a caring person who I see will accomplish anything he puts his mind to. I have no doubt he will have many opportunities open up for him,” she said.

McCurdy said he plans to use his scholarship funds toward tuition, books and getting a more up-to-date computer to use for course work.

“OSUIT has given me the necessary skills to be competitive in the job market,” he said. “It’s the combination of the opportunities I’ve been given and to have the skills and confidence to take advantage of those opportunities.”