School of Visual Communications Dean to Retire After 35 Years

School of Visual Communications Dean to Retire After 35 Years 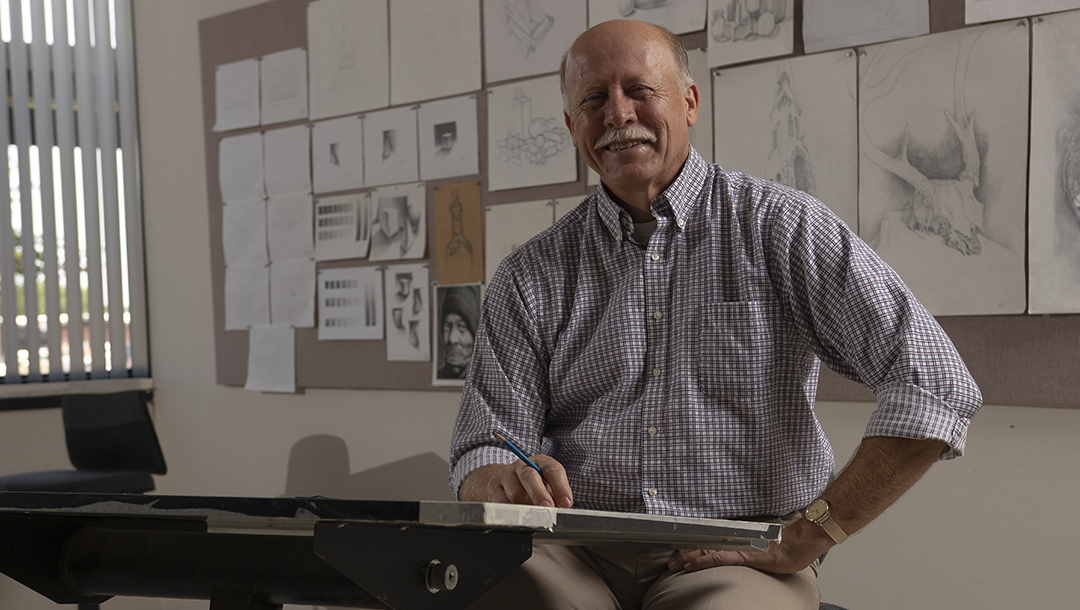 After 35 years as an instructor and administrator, James “Mac” McCullough says he sees OSU Institute of Technology more like a family than an employer.

“I have three very distinct families: I have a very committed and loving church family, I have my biological family who is the bedrock of who I am and what I am, and the third family I have is here. The students, graduates, faculty and those who I have worked with here. I know I can go to any of those three families for love and support.”

McCullough, the dean of the School of Visual Communications, whose story began at OSUIT in 1976 as a student, will retire at the end of June.

McCullough attended OSUIT as a Commercial Art student from 1976-1978. Not long after, he was asked to join the academic ranks as an adjunct in 1984 and began teaching Basic Production and Basic Drawing classes. His tenure with OSUIT evolved from an adjunct to a full-time instructor teaching most courses offered and later as dean.

McCullough has had a long-standing relationship with the art community which aided in several key components within the school.

“Something that I always found to be important was to work with the community and our industry partners,” he said. “We have been very fortunate with several of the advertising agencies who provided real jobs for students to work on and have feedback provided to them.”

McCullough found it to be important that students gain real world application in their training. He implemented a summer trip for those involved in the student club, Visual Communications Collective. The trips had a couple of goals, it needed to take the students to see places they may work or intern and learn their work style and culture, but also to the experience larger cities.

“Being able to take the students and provide them with the opportunity to say ‘Wow, I can see myself working here.’ ‘This is why I’m doing this.’ ‘I had no idea I could work someplace like this and do this type of thing,’” he said.

McCullough’s involvement with the Art Directors Club of Tulsa formed into student involvement at their annual event Graphex for over 29 years in which students were able to be a part of the setup and breakdown of the event and even participate with other peers and professionals.

In 2014, ART Plus, an exhibition and silent auction composed of artwork created by alumni, began as a way to raise money for a new scholarship aimed at helping second-year students in the School of Visual Communications. The first event raised more than $10,000 and has continued annually since its inception.

McCullough said there has been satisfaction and a lot of fun working with students.

“At the end of the day, when they are finished, being able to see what happens with them has been the biggest joy for me,” said McCullough. “I have been able to literally see hundreds of students progress in their careers to have long-term fulfilling careers.”

He reminisces on the fact that he’s experienced having a student in his class who graduated, pursued a career and now her son has come to OSUIT and enrolled in the program. “You don’t get that in other types of careers.”

“I’ve had the pleasure and joy of working with people I truly enjoy and like, which is not always something that people can say,” said McCullough. “I genuinely like and have liked to be around the people I have worked with at OSUIT.”