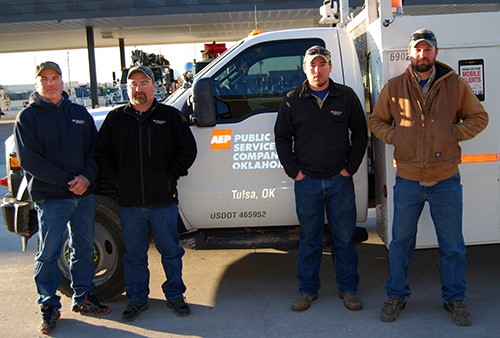 Originally published in PSO Newsletter | Never underestimate the importance of a simple hand tool, like a hammer. In certain circumstances, it can help save someone’s life. That’s exactly the case last Friday morning, when Dean Franklin and his line crew showed up at the right place and time and with the right tool – a hammer – to assist with a motorist’s medical emergency in Tulsa.

The crew, consisting of Franklin, working foreman; Clay Naugle, also a working foreman; Jason Hughes, journeyman lineman; and Will Jenkins, a student-intern from OSU Institute of Technology-Okmulgee, were heading to a job site in a three-vehicle convoy. As they approached the intersection of 51st Street South and 33rd West Avenue, Franklin, driving in the lead in a flatbed truck, spotted a wrecked pickup ahead on the side of the road. It had crashed heavily into a guard rail protecting a pawn shop’s parking lot.

As the PSO vehicles slowed to a crawl a man standing by the pickup waved them down. The man, who turned out to be an off-duty Tulsa firefighter, Captain Matt Tavaglione, had witnessed the wreck and stopped to check on the driver, who was slumped over behind the steering wheel. The driver was unresponsive to shouts, and the doors were locked with the windows rolled up.

The firefighter called 911 and ran up to Franklin to ask if he had a hammer. Franklin grabbed one from his truck’s bin and handed it to the firefighter, who used it to smash the pickup’s window. As Captain Tavaglione checked the driver’s pulse, Franklin and the crew members turned their attention to making the accident scene safe. They flipped on their vehicles’ flashing beacons, pulled on their reflective vests, set up traffic cones and directed traffic away from the site.

The PSO crew stayed on the scene while the Tulsa Fire Department and an EMSA ambulance arrived. At that point the driver stopped breathing and his pulse was fading quickly, so the paramedics laid him on the street and started CPR. News reports say they used a defibrillator twice in restoring his heartbeat.

The driver was taken to the hospital, where he was reported to have recovered.

In a story about the accident on KOTV Channel 6, Captain Tavaglione said that since he was off-duty in his own vehicle he didn’t have the kind of tools with him that the fire trucks carry, so he felt fortunate that the PSO crew arrived at the same time to lend a hand.

Of the incident Franklin said, “We were glad that we came across the scene in time to help with the saving of the man’s life. When you come across something like this, your safety training kicks in.”

When City of Tulsa City Councilor Karen Gilbert heard about this incident from the City Fire Department, she decided to issue a City of Tulsa Proclamation to each member of the PSO crew who assisted Captain Tavaglione, to thank them for their service in immediately assisting and helping save the driver’s life. The crew will be recognized and receive their Proclamations at the February 11th City Council meeting.