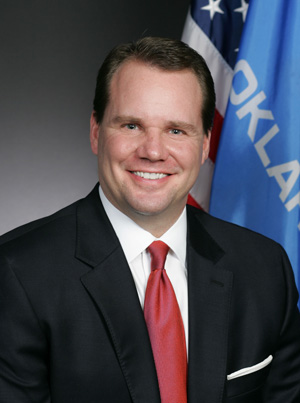 Oklahoma Lt. Gov. Todd Lamb stopped in Okmulgee Feb. 12 and held a breakfast town hall at OSU Institute of Technology with faculty and staff as well as members from the community.

Lamb said he’s trying to visit all of Oklahoma’s 77 counties in the first 77 days of 2015, and last Thursday’s trip to Okmulgee County brought him more than halfway through his tour.

While talking with residents and business owners throughout the state, Lamb said he always asks two questions: what’s our biggest impediment to growth in Oklahoma due to state policy and what can we do to eliminate that impediment.

“I want Oklahoma to beat Texas at something other than football,” he said.

Those at the town hall meeting had the chance to ask Lamb a variety of questions about everything from fracking to education funding.

Lamb said the state spends half of its budget on public education, from elementary through higher education.

“It’s being appropriated, but how’s it being spent? Is it going into the classroom? I don’t think it is,” he said.

Another question asked was regarding state testing and whether there were plans to reallocate funds to reduce testing.

“I’m interested in any education reform that puts more money into the classroom,” Lamb said. “I know State School Superintendent Joy Hofmeister is working with legislators on reforms having to do with testing.”

Lamb said that while he’s a big supporter of the second amendment, serving as an United States Secret Service agent and working on school safety as a state senator gives him a unique perspective on firearms on campus.

“There’s a lot more to the issue than just ‘You are proficient in using a firearm’ and ‘Do you have a permit to carry,’” he said.

And while he didn’t directly say he opposed guns on college campuses he did say, “When I was a student in law school, the last thing I needed was a gun.”

Questions about the economy were also on the minds of those in attendance, specifically how the reduction in oil and gas prices are impacting the state’s economy.

“We don’t know what the impact will be, but know it will be a challenge,” Lamb said, and the legislature is projecting a $300 million shortfall in state funding this year. “If the recovery isn’t an aggressive recovery, next year the challenge will be even greater.”

And while the oil and gas industry is a concern, Lamb said we can’t take our focus off manufacturing either.

“An economy that isn’t fabricating or manufacturing a product, it can’t survive.”