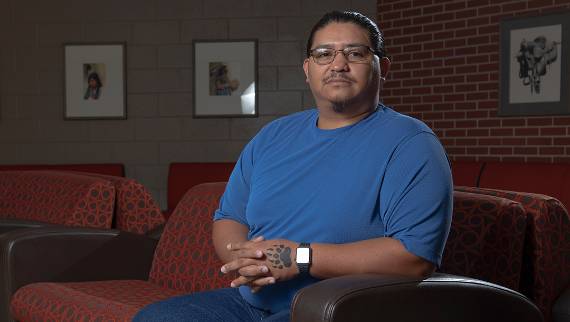 OSU Institute of Technology student and Marine veteran, Zach McGirt has been nominated for the Oklahoma Division of Student Assistance (TRiO) Hall of Fame through the Veterans Upward Bound program housed at East Central University.

The ODSA Hall of Fame is a section of the annual ODSA TRiO Statistics Booklet dedicated to showcasing current or recently graduating participants from various projects throughout the state. Those eligible have demonstrated academic excellence, commitment to education, leadership or perseverance in achieving their educational goals.

The annual statistic booklets are presented to state and federal legislators as a way to show how the TRiO programs have benefited students and encourage continued support for the programs.

McGirt, a Pro-Tech student, exhibits exactly what the Hall of Fame strives to highlight.

“Although he just began in classes, I can already tell he is an exceptional person,” said Sommer Farrimond, veterans services coordinator. “The amount of work he has put in just to be able to attend OSUIT is enormous. Most people in his situation would have given up with the first three or four obstacles and he has had many more than that just to be able to enroll here.”

McGirt began his educational journey in 2002 and enrolled into a college, but realized it wasn’t quite time for him yet and enlisted with the United States Marine Corp. There, he served his country for four years as a motor transportation operator.

McGirt suffered the loss of his younger brother which ultimately led to leaving the Marine Corp.

“They said he looked up to me,” said McGirt. “But I looked up to him. He went to OSUIT, so I knew I ultimately wanted to end up here for that reason.”

But the road to OSUIT wasn’t easy. McGirt struggled with several obstacles that landed him being sentenced to probation. His hard luck didn’t stop there, during his time on probation, another incident caused him to end up serving three and a half years in prison.

“While I was sitting in prison, I had time to think,” said McGirt. “I thought, ‘I’m going to change, I’m going to go back to school,’ where at, I didn’t know, but OSUIT kept popping back into my head since that is where my brother attended.”

There was a lieutenant in prison that discouraged McGirt; he told him that he was just another statistic. That didn’t stop him; he was determined to prove him wrong.

“I told him, ‘I was born a statistic, I’m Native American,’” he said. “I had already overcome so much, I graduated high school, I joined the military, you can’t say what I will and won’t do.”

Through the negativity, he persevered with the help of a strong support system.

“I’ve got a friend that was in the same unit I was in, and he stood behind me the whole way,” he said. “That support from him and my family, and my drive and their drive to support me, helped me get over my obstacles.”

Determined to change, he connected with a friend who introduced him to Veterans Upward Bound.

The VUB program provides intensive basic skills development and short-term remedial courses for military veterans to helps them successfully transition to postsecondary education. The program helped and continues to help McGirt with vocational rehab, financial aid, his GI bill and everything needed to enroll in school.

Upon graduation, he plans to enter the automotive industry and continue to learn.

The Federal TRIO Programs are federal outreach and student services programs in the United States designed to identify and provide services for individuals from disadvantaged backgrounds. They are administered, funded, and implemented by the United States department of education.