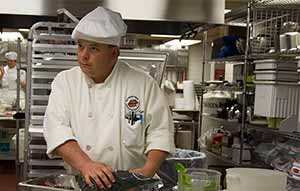 Hubl, a Benedictine monk who has lived at the St. Gregory’s Abbey in Shawnee since 1998, is now also a student in the School of Culinary Arts.

He’s no stranger to the OSUIT campus. Before taking orders, Hubl was enrolled in the Visual Communications Division taking photography courses before earning his bachelor’s degree in photography from St. Gregory’s University.

He used his skills as the university photographer until a year ago when he approached the abbot, the head of the monastery, about going back to school.

“All I did from eighth grade until I entered the monastery was work in the food service,” said Hubl, who already raises chickens for the abbey. “The abbot asked if I would be interested in culinary school.”

He started OSUIT’s culinary program last fall, and he wasn’t sure what to expect.

“It’s interesting. There are people my age here, so that’s nice, and the younger kids don’t bother me as much as I thought. They’re almost protective of me,” he said.

Chef Ron L’Heuraux, culinary instructor, said Hubl is just another student to his instructors and classmates.

“We call him Brother George, but he’s just like everyone else. He’s funny and has a good sense of humor,” L’Heuraux said. “I think a lot of the students think it’s pretty cool to have a monk in their class. For a lot of them, it’s the first time they’ve met a monk. It’s a first for me.”

Although photography and cooking don’t seem to have much in common, both give Hubl an artistic outlet.

“Decorating a cake, it’s like working in Photoshop, creating this visual piece,” he said. “I still get to use my creative skills.”

Hubl gives a lot of credit to the culinary faculty.

“The instructors all seem to know the students’ names, they seem to always be there for the students. They’re very talented in what they do,” he said.

In fact, monks have been ahead of the eat local food movement for years, L’Heuraux said.

“It fits into the food service trend now, raising your own food, growing your own produce, making it self-sustaining,” he said. “They’ve been doing it for a hundred years.”

Hubl is on track to graduate in the spring 2015 trimester and is looking forward to returning to the abbey full time to work in food service and offer his new skills to his fellow monks.

“It’s the hospitality business. Benedictines, we’re hospitable, whether it’s holding a shovel or holding a spatula,” he said.