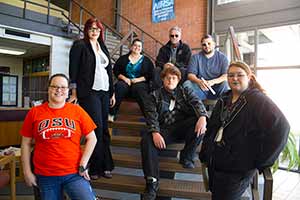 Whether you think of yourself as an ace detective like Sherlock Holmes, an amateur with a keen eye like Nancy Drew, or even more of a bumbler like Inspector Clouseau, you can still try your hand at solving the case during a Murder Mystery on the OSU Institute of Technology campus.

The Halloween Fun Fest for OSUIT students, faculty and staff is Thursday, Halloween night, from 8 p.m. to midnight in Covelle Hall.

Highlighting the free event is the Murder Mystery that turns attendees into detectives as they interview several suspects throughout the evening and try to figure out whodunit.

Amanda McLemore, retention coordinator at OSUIT and advisor of the IT Peer Mentor club, said she wanted to put together a murder mystery because she thought it would be cool.

Apparently others thought so as well. She’s had to turn people away who continue to call and ask to be a part of the cast.

“I never knew it would catch on like it did. I had to tell people all positions are filled,” McLemore said.

The cast is made up of students and faculty from programs across campus including high voltage, culinary arts, information technology and nursing and health sciences.

Dell Dunham, a high voltage instructor, said he didn’t even want to tell his students.

“They’ll hammer me. I’m nervous as hell,” Dunham said, but it didn’t stop him from joining the cast. “I just wanted to do it. It’s a bucket list thing.”

As people arrive for the event, they will be given a detective booklet with character information, clues to find and questions to ask each suspect. Throughout the night, the characters will perform monologues and people can ask the suspects questions until the murderer is revealed at the end of the night.

In addition to the Murder Mystery, the Halloween Fun Fest will also feature a costume scavenger hunt, pumpkin carving contest and bobbing for apples—with a twist, as well as food and prizes.

For more information, contact Amanda McLemore at 918-293-4905 or email amanda.d.mclemore@okstate.edu.