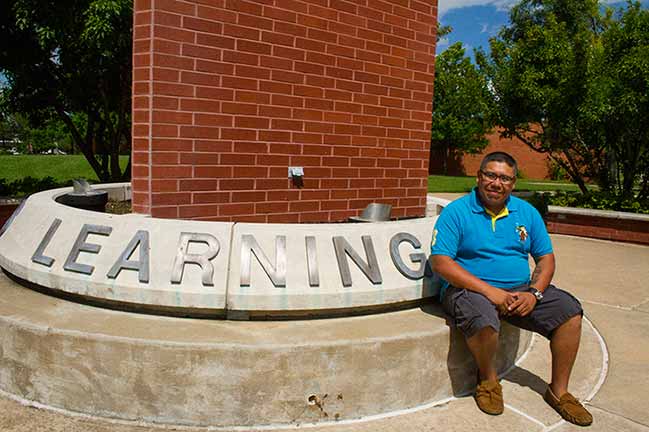 For almost 14 years Zac Wise thought his educational journey was over.

Wise got his GED and enrolled in the College of the Muscogee Nation in 2011. He’s now transferred to OSU Institute of Technology and will earn an Associate of Science degree in Secondary Pre-Education this summer.

Wise, a member of the Seminole Nation of Oklahoma, said growing up surrounded by Native Americans and their culture, coming to OSUIT was a bit of a culture shock.

“At first you can feel like you’re alone,” he said, but after some time getting to know people and participating in campus activities like intramural sports, he became more comfortable. “I think it’s a good atmosphere for minority students.”

Wise also found out he wasn’t alone at all.

In 2013, 20 percent of the nearly 3,000 students enrolled at OSUIT identified themselves as Alaskan or American Indian.

And a recent study by “Diverse,” a publication that focuses on higher education in relation to minority groups, found that several OSUIT programs were top associate degree producers for Native American students.

OSUIT has the No. 1 engineering technologies associate degree program producing American Indian graduates. The institution came in second in the computer and information sciences programs and third in mechanic and repair technologies category as well as the culinary services.

Other areas where OSUIT made the top 10 for Native American associate degree producing programs were in the categories of business operations support; multi-or interdisciplinary studies; education; general business and all disciplines combined.

Dr. Ina Agnew, vice president of Student Services, said the findings of this study gives the university validation that it’s doing its part to increase the number of college graduates in Oklahoma.

“Our commitment to serving our Native American populations is clearly being demonstrated by the number of students who are graduating with their college degrees,” Agnew said. “We have a strong commitment to working with our tribal leaders, meeting the needs of its citizens as well as the goals of those nations.”

Having those partnerships is why Wise chose to enroll at OSUIT after attending the College of the Muscogee Nation.

“I feel lucky to have had that opportunity. To me, it was a blessing,” he said.

For many tribes, a top priority is economic development, and that means having a skilled workforce, Agnew said.

OSUIT is known for its highly skilled graduates who are willing and able to be productive on their first day on the job.

“I believe the reason why these programs are the top degree producers for Native American students is because they prepare technicians with the skills needed most by the tribes, and are the career pathways with the highest-paying jobs in high-demand fields,” she said.

Wise, who is enrolled in the education program, said he has several Native American friends who are enrolled in some of the other top degree programs and really enjoy them.

“I think the programs are a big draw and OSUIT offers a lot to help Native American students with their future,” he said.

For Wise, the education he’s received on campus isn’t the only reason his time at OSUIT has been invaluable.

Not long after enrolling, he joined OSUIT’s chapter of NASA, the Native American Student Association, after someone suggested he check out the club.

“Being a new student I got to meet a lot of new people. At first, I was just helping out. I didn’t want to be in leadership,” he said. “A lot of people reached out to me. I became the president of NASA, and it was actually a really cool experience.”

During his time at OSUIT and through his involvement with NASA, Wise has met lifelong friends, not to mention his fiancé.

“Over the last few years I’ve gained a lot of confidence,” he said. “I’ve learned I can do anything if I try.”