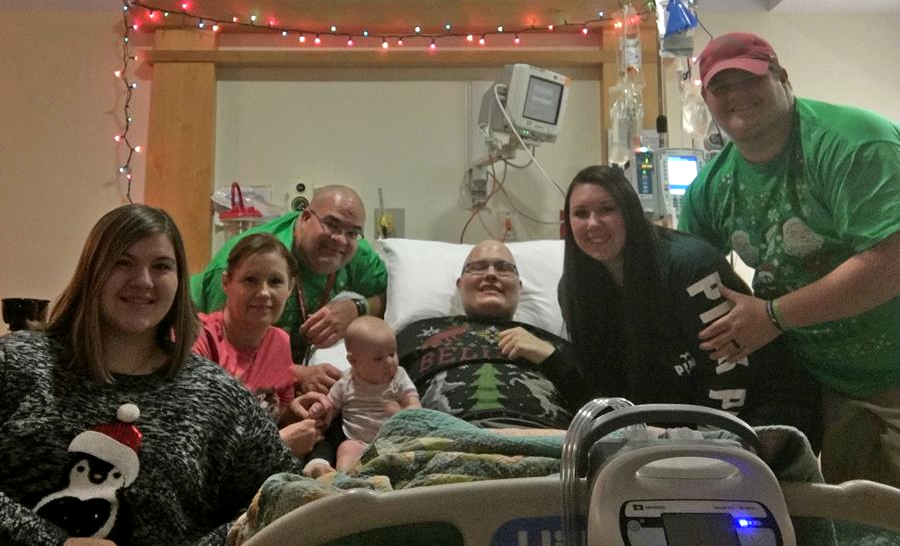 For Tyler George, these final months of classes before graduation in August from OSU Institute of Technology have had their ups and downs.

While he’s celebrating being a new father of a 7-month-old daughter, he’s also struggling as his 17-year-old brother fights for his life more than a thousand miles away.

George, a Natural Gas Compression student, grew up in Henryetta and is the oldest of three children. In May 2016, he and his family’s lives all changed when his younger brother, Nathan, was diagnosed with Burkitt lymphoma, an aggressive type of non-Hodgkin’s lymphoma, while in high school.

“Nathan was very active. He played football, basketball, baseball, and he loved the outdoors. We would go fishing and camping. He was a normal teenager,” George said.

Nathan began having stomachaches and was eventually taken to the hospital and diagnosed with cancer. For five months, Nathan lived and had treatments at The Children’s Hospital at Saint Francis in Tulsa.

“He was cancer free, in remission, but about a week later, it was back,” George said.

Doctors at Saint Francis began to look for studies and doctors across the country who could better combat this aggressive form of cancer and found a doctor in New York City that had treated Burkitt lymphoma before. So George’s parents and 19-year-old sister moved to New York in October 2016 so Nathan could join the study.

George stayed in Oklahoma with his wife and newborn child to finish his degree, but has been up to New York to visit his brother and family numerous times.

“It’s been awful. It’s really hard, but I have to stay focused,” he said.

It’s been tough as his family has dealt with not only Nathan’s continuing health battles but also moving to one of the most expensive cities in the country.

“They’ve downsized to only the things they need, but it’s still expensive. Things like paying to park at the hospital everyday. A family of three going to eat, it’s always at least $100,” he said. “The Ronald McDonald House has become a part of our lives, so at least they don’t have to pay for housing.”

Paula Harrold, the senior administrative assistant for the School of Energy Technologies, said she and George’s classmates knew about his family’s struggles and wanted to help.

“We’ve met every Tuesday to come up with a game plan on how to raise money,” Harrold said. “We’ve joined forces with the Student Government Association and [Student Life Director] Bruce Force and [Sports and Wellness Coordinator] Kamie Rash.”

The group was able to get four sets of tickets donated for the March 23 Casey Donahew Band concert at Cain’s Ballroom in Tulsa. SGA members and Natural Gas Compression students are selling raffle tickets for the concert tickets— $1 for one ticket or $5 for six tickets.

One set of tickets was donated from Cain’s Ballroom and the other three sets, which include a meet & greet with the band, were donated by Casey Donahew himself.

Donahew and his wife even visited Nathan and the George family before a recent concert in New York, and George and his wife will be guests at the Tulsa concert.

George said he was surprised when he learned about the fundraiser for his family just a week before the raffle kicked off.

“It was a shock. I don’t ask people for things. They knew that, that’s why they didn’t tell me,” he said. “I didn’t know what to say.”

Harrold said she’s been touched by the outpouring of help and support for the George family from not only the students, but also alumni and industry partners like John Biggs from Mesa Compression.

“We’re like a family here. We’re not just a program, but we’re a family,” Harrold said. “It makes us proud. These are good men, good human beings, coming out of this program.”

If you would like to learn more about Nathan and his family, go to facebook.com/pray4nathan. For raffle tickets, you can contact Paula Harrold at paula.harrold@okstate.edu or Kamie Rash at kamie.rash@okstate.edu.