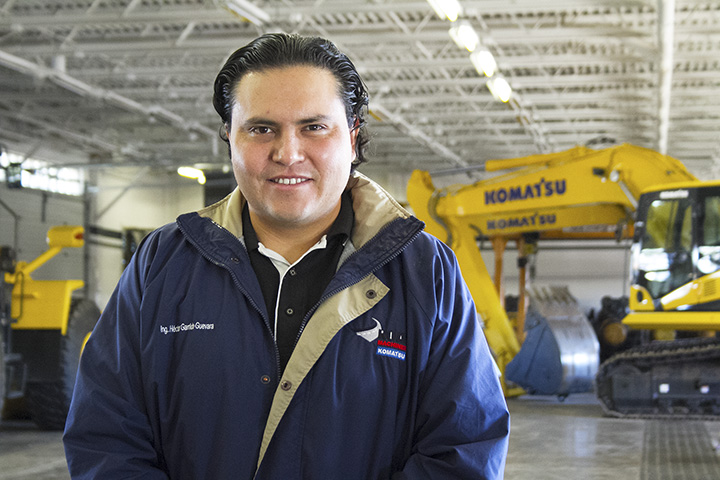 The new instructor of the Komatsu Advanced Career Training program brings international experience to his classes in the School of Diesel & Heavy Equipment.

Hector Garrido-Guevera worked in Mexico first with Komatsu’s large equipment used at mining sites and then as a trainer for the company. For almost four years he traveled all over the country teaching and training other technicians how to operate and repair the large construction and mining machines.

When he saw the job opening at OSU Institute of Technology online, he decided to apply.

“I wanted to change my job. My son was growing up and I was missing it,” Garrido-Guevera said. “I liked the idea of teaching at a university. I had never thought about it before.”

Terryl Lindsey, dean of the School of Diesel & Heavy Equipment, said he knew after talking with Garrido-Guevera via Skype that he was the right choice for the program.

“I saw a guy who wanted to come and make a difference,” Lindsey said and that’s what he’s done since starting at OSUIT in January. “He’s making good changes to the program. He’s doing a lot of good things.”

Garrido-Guevera said he liked being an instructor and trainer when he worked in Mexico, but admits teaching at a university is different.

“The students, they’re young, they don’t know anything yet. It’s challenging,” he said, but that can also be an advantage because they don’t have previous training and habits that have to be changed. “They can learn new things.”

It’s also important that he worked in the industry and knows what students can expect after they graduate.

“I talk to them about the things I’ve seen. I’ve worked with these machines, I’ve been on the job,” Garrido-Guevera said.

And he’s having just as many new experiences as his students: moving to the U.S. with his wife and son, teaching at a university and communicating primarily in a second language.

“I’ve learned a lot of things. The students are helping me,” he said. “There’s a big difference between the schools here in the U.S. and the schools in Mexico. I would have loved to have a Komatsu program like this when I was in school. They have a lot of tools and equipment that’s hard to find there.”

Getting Garrido-Guevera here to OSUIT wasn’t easy, Lindsey said. There was a lot of government involvement to get he and his family settled in Oklahoma, but he is sure the hard work will be worth it.

“The Hispanic student body is getting larger. Hector is bilingual and he can communicate with those students better than I can,” he said. “I’m expecting Hector to grow this program. We have 32 students right now and we have room to grow. I think he’s going to be a great addition to our school.”

Tags
Komatsu ACT
Back to Top
©