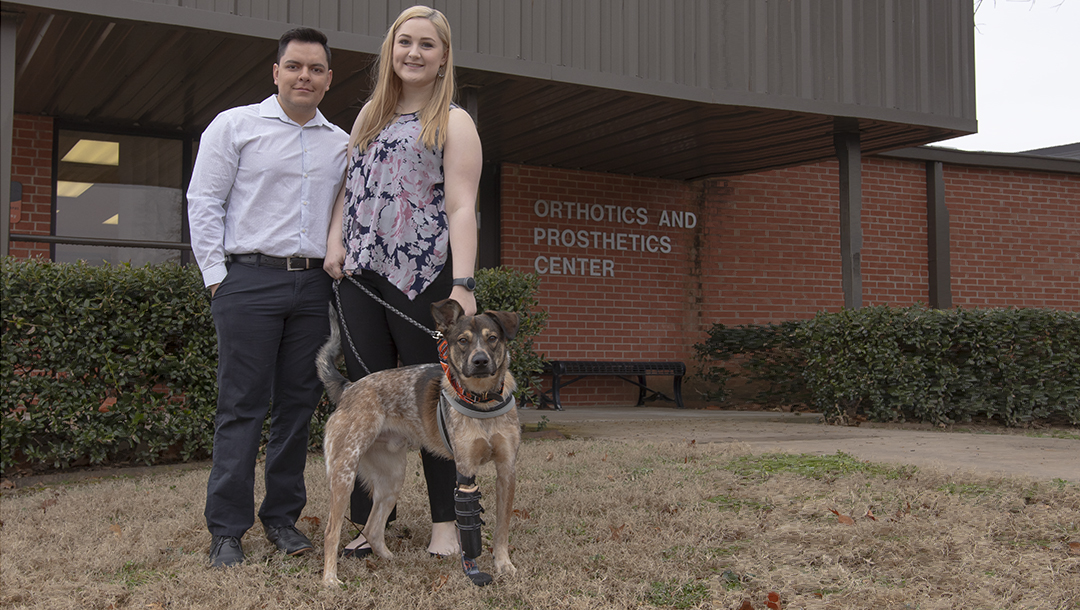 Meet Austen, a tripod puppy with a new lease on life. The year-old mixed breed is missing a paw, but thanks to OSU Institute of Technology’s Orthotic & Prosthetic program, he has a chance to walk — and even run — like the rest of his four-legged friends.

Kristen Ryan and Luis Cabrera adopted Austen from Oklahoma City Animal Welfare as a puppy. “We went in looking for a different dog, and Luis pointed out Austen saying, ‘Look, he has three legs; that’s awesome!’” After visiting with Austen for a few minutes, they knew he was the dog for them.

Austen, however, was severely ill and had an infection in his leg, where his paw had been amputated after a vehicular injury. Ryan decided she wanted to save Austen’s leg.

OSUIT’s O&P program had just begun its transtibial (below-the-knee) prosthetic class when Ryan discovered it through her online search for help.

“The timing was serendipitous, and the class was excited to take on the challenge,” said Mike Madden, Orthotics & Prosthetics instructor.

The first visit was an assessment to determine Austen’s physical needs. Once comfortable with his physical capabilities and temperament to be a candidate, class members began developing the prototype with design characteristics similar to a human prosthetic running foot.

“The transtibial prosthetic class was involved from the beginning,” said Madden. “They fell in love with Austen, his puppy enthusiasm and his good-natured temperament.”

Although creating a prosthesis for an animal is similar to creating one for a person, there are unique challenges with a patient who can’t speak.

“We had to use more observational skills when working through this process,” said Madden. “The dog cannot tell you what they are experiencing, so you have to deduce that through observation. The anatomy is different, as is the mode of ambulation and the activities that a dog will engage in on a daily basis.”

The students’ education is typically focused on fabricating the devices, and they don’t always get to witness outcomes.

“I loved getting to think through and address the unique challenges posed by fitting an animal with a prosthesis,” said Tabitha Parker, OSUIT alumna. “With an animal patient, you have to think outside the box a bit. Their anatomy is different — they have fur; and you can’t explain what you’re trying to do to help them.”

Madden said watching the students’ excitement and passion as they worked through this project was his favorite part.

“We approached the task of attaching a device to a limb from a new and relatively unexplored direction,” said Nicolas Bromley, OSUIT alumna. “Our field has many resources and research for attaching devices to human limbs, but to approach the basics from a limb that only resembles what we had previously learned meant applying the fundamentals of the concepts instead of applying previous solutions.”

There’s more to come as Austen grows and changes. Similar to athletes with an amputation, Austen already has two prostheses: one for sports and one for everyday use, both from OSUIT.

“When we first got Austen, he was destructive due to not having mobility,” said Ryan. “Once he had the prosthesis, and we learned to care for a tripod, we were able to meet his needs to where he wasn’t bored and is now able to burn off that energy with normal dog activities.”

Austen now has the ability to do normal dog activities with his prostheses — playing fetch, tug of war, and chasing birds — thanks to OSUIT.

“Before we knew that we were accepted, we researched costs of prosthetic legs and weren’t sure how we would pay for it. We really care for him and just wanted the best outcome,” said Cabrera. “We are grateful OSUIT accepted this challenge to help Austen live a long happy life.”