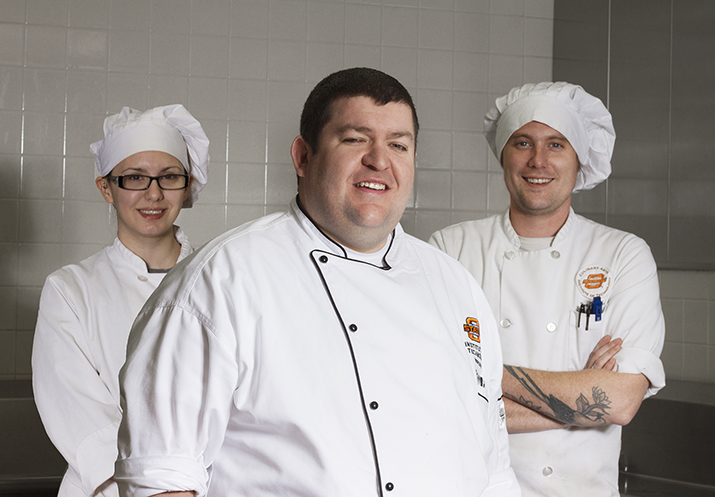 Chef Bill Leib, instructor at OSU Institute of Technology’s School of Culinary Arts, will soon do more for his students than just teach them.

The new Chef Bill Leib Scholarship is being established that will be awarded to a student or students seeking an Associate in Applied Science in Culinary Arts.

The school hopes to award the first Chef Bill Leib Scholarship in the fall 2015 semester to one or two second year students to help with their continued education costs.

The scholarship came about after Leib was invited to participate in the John Hope Franklin Center Dinner of Reconciliation in 2012, and he’s volunteered his time and talents every year since.

Now a portion of the proceeds will go towards the Chef Bill Leib Scholarship fund.

“It’s an honor. I feel good to be able to give back to the students,” Leib said.

Originally from Pennsylvania, Leib graduated from Johnson & Wales University’s College of Culinary Arts in Rhode Island, but always looked for a chance to move to Oklahoma after visiting friends in the state.

“I saw the job at OSUIT, applied and have been here five years now,” he said, and has taught almost every class offered, but specializes in international and modern cuisine.

“Bill is one of those visionary people. He’s five to 10 years ahead of the trends,” said Chef Rene Jungo, School of Culinary Arts chair. “It’s nice to have a visionary person on the faculty.”

The scholarship epitomizes the idea of continued education, something Leib feels strongly about.

“If you don’t continue to learn what’s current and what’s new, you’re going to die in the industry,” he said.

Jungo said Leib has been in a leader in seeking out and learning about new cooking techniques and trends through memberships in organizations like the American Culinary Federation and the Oklahoma Restaurant Association.

“I try to stay active with groups in the state. It’s a good recruiting tool and it gets OSUIT’s name out there,” he said.

Leib said he’s thrilled to be able to help the Culinary program that’s become like a second family to him.

“It’s a small program. You really get to know the students and work with them one-on-one, you hear about their successes,” he said. “It’s a more family atmosphere. You’re more than just a number and this is more than just a facility.”