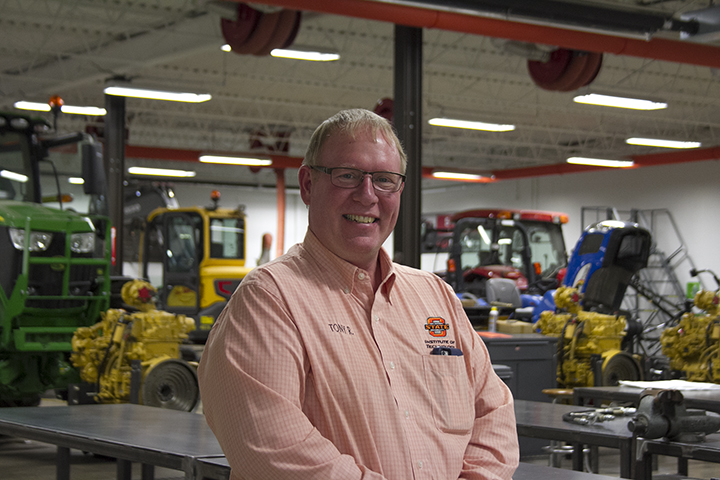 Tony Redington can’t seem to keep away from college classrooms.

He graduated from Southwestern Wisconsin Technical College in May 2015 after years of working as a combine technician because he was ready for something different. Initially he started looking at product support jobs in the agriculture industry, but teaching positions kept popping up on his job searches.

He applied for and was hired as an instructor in OSU Institute of Technology’s Western Equipment Dealers Association Technician Training program, which prepares graduates to service farm and industrial equipment. He moved in the spring and started working at OSUIT in early April.

“To me, it’s a dream job. It sounds like fun for me,” said Redington, who brings years of experience and knowledge of servicing farm machinery. “I’m pretty sure I know what the difficult spots will be for the students. There’s a lot to learn when it comes to hydraulics and electrical systems.”

David Martin, who was the first instructor in the Western program when it started in 2005 under the name SouthWestern Association, said Redington brings experience in areas that will be invaluable to students.

“On the precision farming side, he brings that knowledge and will make this program better than it’s ever been,” Martin said. “He knows how it works. He really brings valuable knowledge to that area. He also brings a lot to the electrical side too.”

Coming from a rural county in Wisconsin— one that doesn’t even have stoplights— Redington said he knew the kind of job he was looking for would take him away from his home, but he didn’t know it would take him all the way to Oklahoma.

“It was scary, but this wasn’t as scary as going to college. My biggest fear was going to college and then not making it,” he said. “Since I’ve been down here, I haven’t met with anyone that wasn’t a positive experience.”

Redington said he was familiar with other farm equipment technician training programs, but OSUIT’s program is more rigorous and in-depth with on-the-job internships a major component of the curriculum.

“I want to teach technicians, and technicians work with their hands. Here you don’t just read the textbook all the time. Here they get down and dirty and work with their hands,” he said. “We have the latest and greatest out there in the lab. There are brand new tools out there, brand new tractors. Other programs don’t have anything close to that.”

Redington said he hopes he can help the students transition into the workforce by imparting some of his experiences and the lessons he learned the hard way.

“These guys are going to make mistakes, but I want them to learn the process so that when they are out in the dealerships they know what to do or at least know the process for how to figure it out,” he said.

The farming industry is evolving in the U.S., Martin said, and the need for skilled and highly-trained technicians is greater now more than ever.