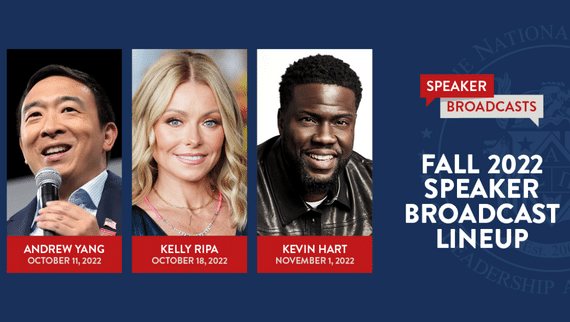 The National Society of Leadership and Success has announced the speaker broadcast series for the Fall trimester, including American businessman and political candidate Andrew Yang, actress and talk-show host Kelly Ripa, and actor and comedian Kevin Hart.

The series is built within the NSLS Program that members go through but is also open to all OSUIT students and kicks off October 11.

Andrew Yang was a 2020 presidential candidate and a 2021 candidate for New York City mayor. Named Presidential Ambassador of Global Entrepreneurship by President Obama, he's the founder of Humanity Forward and Venture for America. Yang graduated from Brown University, where he graduated with degrees in economics and political science, and Columbia Law School, where he was an editor of the Columbia Law Review.

Kelly Ripa has been a household name for over two decades, with her sharp wit every morning as the host of the award-winning Live franchise. Ripa has earned the prestigious Excellence in Media Award from GLAAD, Glamour's Woman of the Year, and six Daytime Entertainment Emmy®️ Awards for Outstanding Talk Show Host. She's also consistently recognized by The Hollywood Reporter as part of its annual Women in Entertainment Power 100 list and the publication's 35 Most Powerful People in Media.

Kevin Hart has become one of today's most successful entertainers in Hollywood. Originally a stand-up comedian, Hart has since starred in big box-office films and popular TV shows and released several well-received comedy albums. His first novel, Marcus Makes a Movie, was an instant New York Times bestseller and depicted the importance of focusing and working hard to reach your goals. Its sequel, Marcus Makes It Big, delivers a heartfelt message about the perils of sudden fame and the importance of sticking close to the friends and family who helped get you there.

Each spring and Fall, NSLS members are invited to attend a speaker series and engage in small groups with their peers on campus to create connections and accountability.

"Our OSUIT NSLS program teaches the foundations of leadership; effective communication, understanding how to set a goal and effectively reach that goal, teamwork and working with others from different backgrounds and communication styles," said Kamie Crawford, Director of Student Life and NSLS co-advisor. "This supplements all of the technical skills that OSUIT students are learning in the classroom with communication and soft skills that they will continue to use in their daily lives as well in their careers as they leave OSUIT and become contributing members of society."

Invitations to join the NSLS are sent out before the start of every fall and spring trimester. The program is available to students with a minimum GPA of 2.75 and at least six credit hours on their transcript. Students who join the OSUIT chapter complete a 5-step leadership program throughout the trimester.

Students that receive an invitation can join NSLS by submitting their nomination code online and paying a one-time membership fee of $95. OSUIT has a limited number of need-based waivers through the Dean of Students NSLS Waiver application program available for those that wish to participate but need help covering the cost of registration. .

"OSUIT's chapter of NSLS is a safe space for students to practice their leadership and communication skills," said Annette Lorraine Wright, Activities Coordinator and OSUIT NSLS chapter co-advisor. "It provides an environment that cultivates personal growth and team building. Having peers encourage and celebrate each other in their little wins is what gives the members of NSLS the drive to continue achieving their goals long after they graduate."

NSLS is the only accredited honor society in the United States. The program is accredited by Cognia and recommended by the National College Credit Recommendation Service and the American Council on Education.

"Students who join will walk through a program to teach them more about their personality, passions and leading others. But it will also open the door to many opportunities to hone in and practice the soft skills needed in a long-term career in industry," Crawford said.