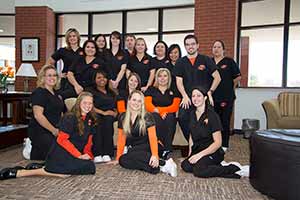 Friday morning the graduating nursing students will participate in a ceremony that’s more than a century old. The ceremony will be held at 9:00 a.m. in Covelle Hall.

Pinning ceremonies for new nurses date back to the 1860s at the Nightingale School of Nursing at St. Thomas Hospital in London.

This semester 17 OSU Institute of Technology nursing students will take part in this tradition.

“Graduate nurses have proudly displayed on their uniform the pin that represents their individual school of nursing,” said Jana S. Martin, Nursing and Health Sciences division chair. “The nurse’s graduation pin is a treasured symbol that conveys to others an association and everlasting bond with his or her school.”

Martin said Friday’s ceremony also includes a candle lighting element, an homage to the lighting of lamps at the first pinning ceremonies.

The lamp was a symbol of care and devotion that nurses administer to the sick and injured. After the nurses were pinned the lamp was lit and the flame passed to each nurse as they said the Florence Nightingale Pledge.

For the students graduating this week, the pinning ceremony also symbolizes the completion of a rigorous and physically demanding nursing preparation program.

“I think we’ve got to know each other pretty well,” Lincoln said, which makes the pinning ceremony bittersweet. “I’m going to try not to cry. I hate crying in public. It’s the thank you’s that get me.”

Lincoln likely won’t be the only student holding back tears. Many of the students said they chose OSUIT’s nursing program because of the sense of community they found there.

“I like the small school atmosphere,” said Megan Williamson.

And Jamie Wesley said at larger schools, students don’t get the one-on-one instruction and training like they do at OSUIT.

Lincoln said she drives from Collinsville, an hour and 15 minute one-way commute, to attend OSUIT.

“Some of the other schools I looked at, the classes were huge,” she said.

Now those classes are over and the students said they are both nervous and excited about the pinning ceremony.

“I look at it like graduation,” said Molly Williams.