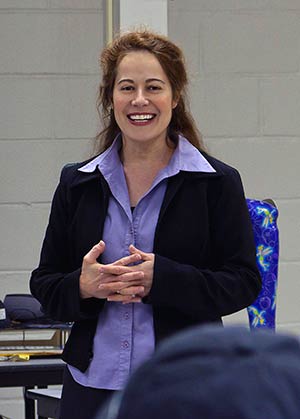 Block, OSUIT Orthotic and Prosthetic Technologies program director and instructor, was given the award at the 19th Annual “Making It Work Day at the Capital” event sponsored by the Oklahoma Career and Technical Educators Equity Council. The event recognizes students, individuals, educators, and community and businesses leaders committed to removing barriers to success for families in poverty by providing educational experiences beyond the classroom.

Block is director of one of only six accredited orthotic and prosthetic technology programs in the country and the only female director, according to Ronda Weaver, president of OKCTEEC.

“Under Ms. Block’s leadership, both overall and female enrollments have doubled in just two years,” said Weaver. “Female students now represent 60 percent of the students in a field where women typically represent less than 20 percent.”

Block’s success with recruiting females earned her the National Outstanding Member Award from CTEEC for 2011-2012, after earlier receiving the Oklahoma chapter award.

OKCTEEC is affiliated with the administrative division of the Oklahoma Association of Career and Technology Education. The council advocates for students pursuing non-traditional careers and educational resources for single parents.

“Students are recognized for their successful efforts to obtain education, training and employment amid the struggles faced by striving to rise above poverty and overcoming biases,” said Lou Ann Hargrave, OKCTEEC advisor and CareerTech state coordinator for Work Prep.

“By contributing to the professional development of students in poverty, we are able to improve the economic outlook for the future,” she added.