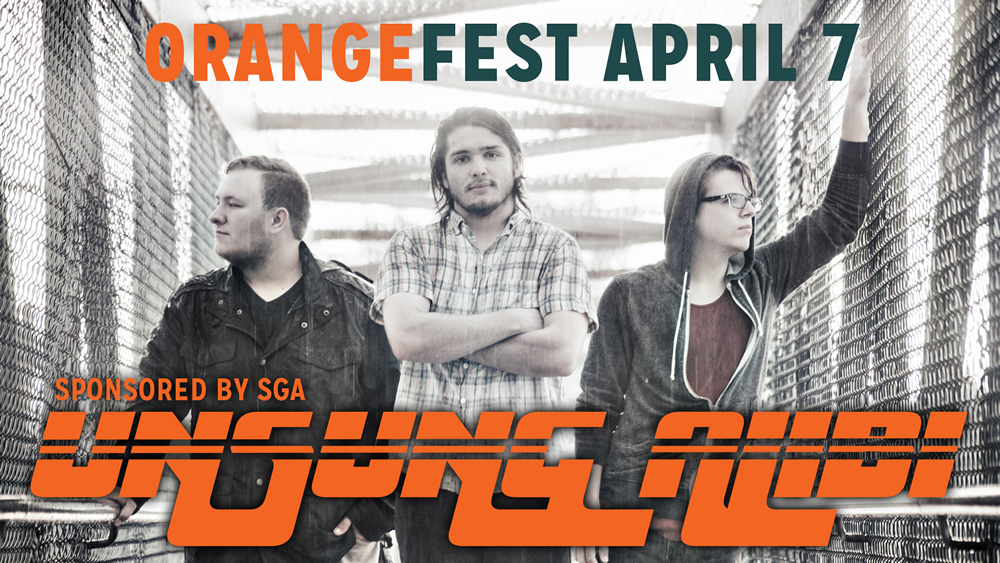 This year’s OrangeFest will offer festival attendees plenty to see, hear and sing along to with several performers and musicians lined up to entertain during the event on April 7.

Local band Unsung Alibi will headline the OrangeFest main stage when they perform at 5 p.m.

“We are excited! It’s not often we get to play our hometown, so when we do we jump at the chance,” said Drinnon. “We played OSUIT in 2016 during Welcome Week, and we were stoked to see everyone come out to watch us play.”

“We chose to sponsor with the concert because music really brings people together,” said Jenna Mitchell, SGA representative. “I think Unsung Alibi is a great fit for the event because they are locals making a name for themselves. They are putting themselves out there, and it is inspiring to show what people from a small town are capable of.”

The band plays most often in Tulsa but is hoping to make some new fans in their hometown by playing at OrangeFest.

“We hope to reach an audience of people who have never heard us play before. Building a fan base and a relationship with fans is a huge thing for us,” he said. “A lot of people don’t know us in Okmulgee or what we sound like. We hope that OrangeFest will help us gather a nice hometown crowd.”

In addition to Unsung Alibi, there will be several other performers entertaining the crowd including the Preston Jump Rope Team, who will do a special glow-in-the-dark performance the evening of OrangeFest.

“I can’t wait to see it live,” said Heather Sumner, Okmulgee Main Street Executive Director. “Also back by popular demand, we will have the Okmulgee County Singrays singing a couple of songs after they finish participating in the Glo Run 5K.”

After the announcement of the Glo Run winners, a local DJ will turn downtown into a block party playing crowd favorites.

“This might be my favorite addition to OrangeFest this year,” Sumner said. “I can just picture downtown full of people, of all ages, decked out in glow wear dancing the night away.”

Drinnon said they love performing, but they’re also looking forward to checking out OrangeFest and cheering on the other performers.

“We just really love playing shows. It doesn’t matter if we play to five people or 500. We are in a band to have fun and show people what we have worked hard to do,” he said. “But we are super excited for the other performers at OrangeFest because it is always fun to network and talk music with other people.”

And no festival is complete without music.

“It doesn’t matter how old or how young you are, music brings people together,” Sumner said. “This year with having a band and a DJ plus special performances, I think we’ll have something for every festival-goer.”

Mitchell said she hopes it will also bring students and the community together.

“SGA wanted to help with OrangeFest this year because it’s a great way to get the community together. It is an awesome night where our college students can get the opportunity to really bond with Okmulgee and get to know the town,” she said. “Getting involved on campus is one thing, but taking your organization to the community is a very powerful thing. By having Okmulgee welcome our student programs, like they do at OrangeFest, it shows how great of a town we are lucky enough to be in.”

For more on this year’s performers, go to osuit.edu/orangefest.