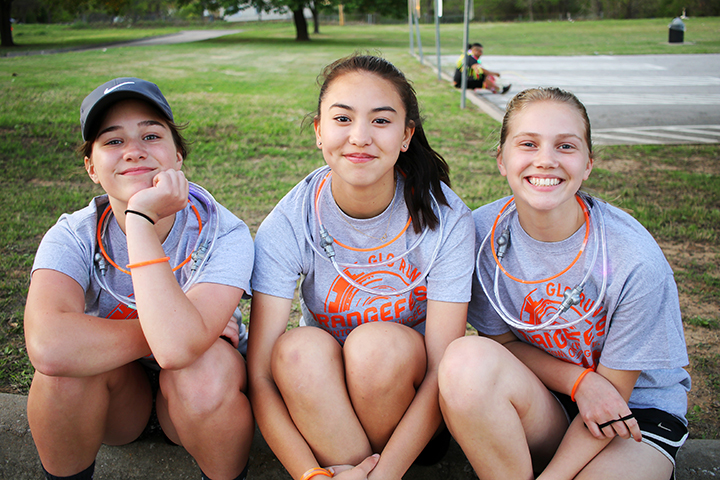 It’s time again to lace up the shoes and light up the streets for the annual OrangeFest Glo Run 5K on Friday, April 13, in downtown Okmulgee.

Run organizers have changed things up a bit this year with a new race route that begins and ends near the Creek Council House Square right in the middle of the action of OrangeFest.

Michelle Camacho, wellness coordinator with the Okmulgee County Health Department and Glo Run 5K committee member, said having the starting and finishing line so close together means participants and their supporters can enjoy everything OrangeFest has to offer without leaving downtown.

“The change in this year’s Glo Run 5K route is in an effort for families and participants of the run to have a chance to congregate at the OrangeFest event,” Camacho said. “While family members run, others can enjoy themselves as they wait on their runners to return.”

Registration is $15 and run packets include a Glo Run shirt and glow stick. People can register and pay online at osuit.edu/orangefest or in-person at the OSU Institute of Technology Campus Bookstore in the Student Union, 1801 E. 4th Street.

Camacho said this year’s participants will enjoy some new scenery as they run or walk the race route.

“This route will highlight some of the great additions that have been made during this revitalization of Okmulgee. Runners will see some of the town’s best murals while running past the Lokal Okmulgee coffee shop as well as the newly painted OSUIT Grand Old Post Office Student Housing mural that will be lit,” she said. “After running by these murals, runners will use our newly painted bike lanes down Seminole Street all the way to Hawthorne Park. At the park, participants will have the chance to run around the new trail system and check out Okmulgee’s very own skate park, which is said to be one of the best in the state.

Last year, about 130 people participated in the Glo Run, with the goal of even more taking part this year.

“Our goal is to make the Glo Run bigger and better every year. We want everyone, no matter their age, to have so much fun that they look forward to this event every year,” said Heather Sumner, director of Okmulgee Main Street. “Participants are encouraged to get crazy with the glow and bring even more glow attire for the run. Not only will we be presenting the first place male and female with a prize, but the ‘glowiest’ individual, kids included, will also win a prize.”

Sumner said people of all ages and abilities are encouraged to take part in the Glo Run 5K and OrangeFest.

“This is not a timed run, so the bring the kids, strollers included, and have some healthy fun as a family. This might be something that your entire family looks forward to doing together every year,” she said. “Once you are here, there will be plenty of things to keep everyone in your family entertained.”

For more information on the Glo Run 5K including route map and registration form, go to osuit.edu/orangefest.