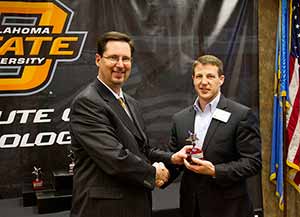 There was a full house in the State Room on April 11 for OSU Institute of Technology’s second annual Alumni Homecoming Reception.

At the reunion for all graduating classes, the university made history by recognizing several of its alumni and inducting them as inaugural members of the OSUIT Hall of Fame.

Four individuals were honored as Distinguished Alumni, those who are established in their professions and whose career accomplishments have been outstanding; five honorees were recognized as Rising Stars, those alumni who demonstrated significant or outstanding accomplishments within their first ten years of graduation.

Each of the recipients shared memories of their alma mater and acknowledged guests who were instrumental to their success.

“Since OSUIT opened its doors in October 1946, nearly 68 years ago, we have proudly graduated some 30,000 individuals,” said Executive Vice President Linda Avant in her opening remarks. “And, that’s why it’s no surprise to find these individuals throughout major corporations and places of work all around the world.”

Distinguished alum Virgil Sharp (’75) is a veteran in the HVAC industry and works as Commercial Services Manager at Air Conditioning Innovation Solutions in Dallas. As a member of OSUIT’s Air Conditioning / Refrigeration advisory committee, he has been instrumental in placing interns, assisting with recruitment efforts in the Dallas/Fort Worth area and donating HVAC equipment for the ACR program for training purposes.

Dr. Avant recounted her conversation with him about the reception and his pending award.

“When I talked to Virgil about coming tonight, he asked ‘What do I need to do?’” she told the crowd. “And I said to him ‘You’ve already done it.’ His service to this university has gone well above and beyond the call of duty.” 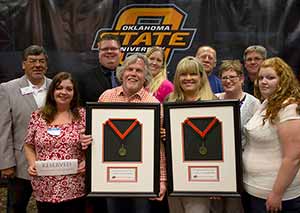 During the reception, OSUIT President Bill R. Path addressed those in attendance before the induction ceremony.

“We want you to feel proud of where you graduated from. Come back and see what the programs are doing and how they’ve evolved,” Path said.

One of the alumni who attended this year’s reception was Diana Sullivan, who graduated in 2000 with an Associate in Applied Science degree in Graphic Design from the Visual Communications Division.

“I love this institution because it met my principles of higher learning,” Sullivan said. “The two years at this school were some of the best times of my life. I had such good instructors. I graduated with a big smile on my face.”

Before enrolling, Sullivan had heard about OSUIT, but really didn’t know its mission and what it was about until she attended, she said. Now her daughter and son-in-law are instructors, and they are the ones who told her about the reception.