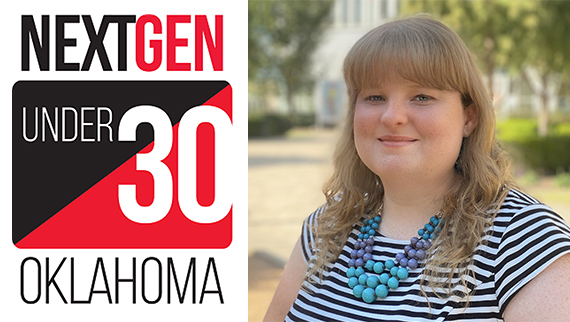 Randie Durant (Crawford), OSU Institute of Technology alumna, has been recognized as a NextGen Under 30 Oklahoma winner for 2020 in the media, public relations and advertising category.

NextGen Under 30 recognizes and encourages the next generation of innovative, creative, and inspiring individuals who push the boundaries in various categories of endeavor. In addition, award winners are selected based upon their participation in and contribution to their communities.

Durant, who graduated in March 2011 from the OSUIT Graphic Design Technology program, is the AVP, art director II, for Bank of Oklahoma. She started with BOK right after graduation as a production designer and worked her way up in the past nine years.

"It is crazy to be named a NextGen Under 30 winner," said Durant. "I had never heard of it before until my manager mentioned it. After completing my submission, I had no confidence that I would be chosen! In my mind, I didn't stand a chance against John Doe, who works for an attorney or Jane Doe, who donates all her time to the community. I'm just Randie, living my daily life!"

Durant's manager, who also attended OSUIT, encouraged her to enter based on her hard work over the past few years, pushing boundaries and finding new ways to support their team. Her hard work doesn't stop at her day job. Outside of BOK, she also does freelance design, helping nonprofits and small businesses bring style to their message and reach their target audience and teaches a self-defense class.

"Before COVID-19, I was teaching a ladies self-defense class in Brazilian Jiu-Jitsu techniques," said Durant. "Giving ladies back the confidence of being strong by using leverage to apply techniques and counters on an opponent that is much larger."

Durant said that she has always been a creative person, which led her to the Graphic Design Technology program at OSUIT.

"I've always been doing things with my hands and experimenting with different mediums," she said. "My parents loved to travel, so growing up, I was always intrigued by how advertisements were laid out and for what reason."

In high school, Durant's father suggested she try the local vo-tech and take their computer science class. This is where she learned that she enjoyed graphic design.

"I was down to two schools and considered a school as far away from hometown as possible, but when I toured the campus and saw the classrooms and student work, it didn't feel right," she said. "Then we toured OSUIT. The classroom projects were intriguing; the teachers were super nice, and luckily the girl who showed me the dorms went to the other school and wasted a year of schooling to learn nothing. So, my feelings were confirmed, and I went with OSUIT."

She mentioned that not only did OSUIT help build a stable footing for her future, but she also met her husband at OSUIT.

"OSUIT was a huge game-changer for my life," she said. "It is a huge honor to be recognized, and I hope that my achievements or knowledge will help someone someday."