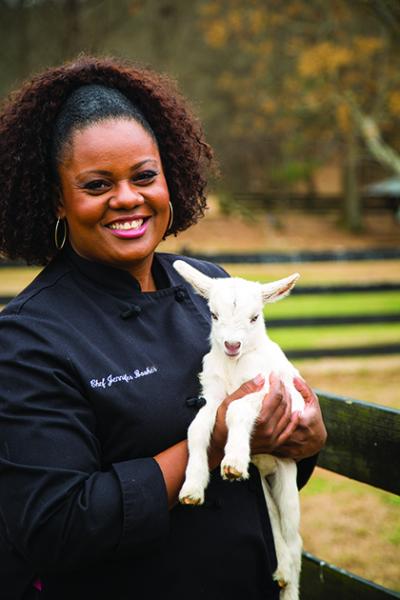 OSU Institute of Technology alumna Chef Jennifer Hill Booker is coming back to her alma mater to meet with students in the School of Culinary Arts and sign copies of her new cookbook “Field Peas to Foie Gras: Southern Recipes with a French Accent.”

Booker will be on the OSUIT campus Thursday, Feb. 5, taking part in a few classes before a meet and greet and book signing in the lobby of the State Room from 11 a.m., to noon. Copies of Booker’s cookbook are available to purchase at the Student Union Bookstore.

She will also hold a book signing in Tulsa on Saturday, Feb. 7, from 2 to 4 p.m., at Barnes & Noble, 8602 E. 71st St. A portion of the proceeds from the cookbook sales during the Barnes & Noble signing will go into a scholarship fund for OSUIT culinary students.

School of Culinary Arts Chair Chef Rene Jungo said he is thrilled Booker is coming back to share her experiences and techniques with some of the classes and faculty.

“I know the students, and all of us, will be inspired by her enthusiastic personality,” said Jungo, who remembers Booker vividly when she was his student. “She always had that outgoing drive to seek new horizons and an eagerness to learn.”

Booker said growing up she knew cooking would be a part of her future because it played such an important part of her childhood.

After graduating from Tulsa’s Booker T. Washington High School and earning a bachelor’s degree in communications from the University of Tulsa, Booker enrolled at OSUIT’s School of Culinary Arts and graduated in 1995.

“It was such a great school. There were international instructors, it was a great environment to learn and was small enough that there was a lot of hands-on learning,” Booker said.

Booker moved to Germany with her husband, an officer in the U.S. Army, and started her own personal chef service, Your Resident Gourmet, for military families living on the base.

She also took advantage of her European residence and attended the prestigious Le Cordon Bleu College of Culinary Arts in Paris.

“OSUIT really prepared me for that experience because it was so hard,” Booker said. “A lot of my classmates quit.”

When she returned to the United States, her personal chef business continued to grow and she became an instructor teaching at the Le Cordon Bleu campus in Atlanta as well as starting the culinary program at Grayson Technical Education Program in Georgia.

Even though Booker has spent time in Michigan, Florida, Oklahoma, Virginia, North Carolina, Georgia and abroad in Germany and France, she really considers herself Southern.

“My family is originally from the delta of Mississippi, and I spent every summer there,” she said, and those experiences along with her time in France helped shaped her cookbook. “It’s my family recipes from the Mississippi Delta and incorporating some French techniques and flavors. Lightening it up a bit.

“There’s something for everyone, cocktails to canned goods. People will feel like they have me in the kitchen with them.”