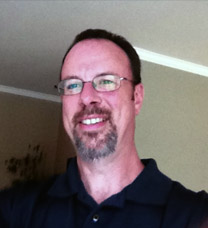 Madness is coming, like it does every spring for college basketball.

Whether you’re a super fan who has followed the sport since the season’s tip-off or someone who needs a reminder of what a layup is, there will soon be an online game so both can enjoy the action.

Gale Venosdel, who went through OSUIT’s Visual Communications program in 1993, developed the game, 13 Unbracketed, 25 years ago and since then his friends and family have been playing it every year during the NCAA tournament.

It had always been played on paper, but several years ago when online fantasy sports games and apps began really gaining momentum, Venosdel started putting a team together to help transfer his game from paper to a digital format, including his friend and fellow OSUIT alum James Ward.

But before Ward could start working on the online version, he had to play it.

“I’m not a basketball fan, especially a college basketball fan. I knew nothing about these teams,” said Ward when he first played 13 Unbracketed about four years ago. “It was fun. It made me, as a non-basketball fan, pay attention.”

Venosdel said he’s a fan of fantasy sports games and he saw a big opportunity in the NCAA basketball tournament.

“There’s 48 games in four days. There’s upsets, Cinderella stories, buzzer beaters, all the things that make it madness,” he said. “But the bracket is frustrating. You go through the whole thing, you make your choices and you know it won’t be right.” 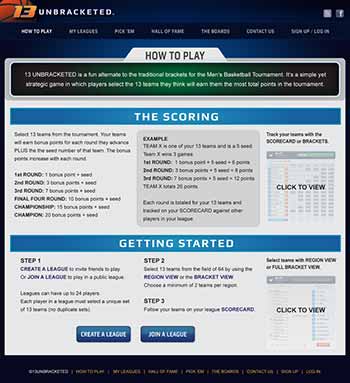 So the game Venosdel started more than two decades ago takes the bracket buster problem out of the equation.

Players choose 13 teams out of the 64 available and earn points as those teams progress through the tournament.

“It’s a two-tiered scoring system that encourages you to find the underdogs, those Cinderella stories that really make the tournament,” he said.

The seed number of the team is multiplied by the number of wins, so if someone chooses a number 12 seed and that team wins three games, it earns that player 36 points.

Bonus points are also given to each team as they advance through the tournament, with one point awarded in round one and 20 points at the championship game.

And while players don’t fill out a bracket, it doesn’t mean they should throw it away, Venosdel said. The bracket is needed to figure out what teams to choose and where they are seeded.

“You’re looking at the brackets, looking at the seeds, who will play late. Trying to find some of those teams that will get on a run,” he said. “It’s a cool combination of underdogs and favorites.”

That aspect of picking 13 teams means one or two losses doesn’t mean you’re out of the game, Ward said.

“When you play a traditional bracket, it’s easy to get your bracket busted right out of the gate. With 13 Unbracketed, you could be in it all the way to the end. You can still be in the game and competitive without a ton of knowledge,” he said. “It’s easy to play and it’s just a fun game.”

Venosdel has started a fundraising campaign on Indiegogo to help fund the game development with the hopes of having 13 Unbracketed available online in 2015.