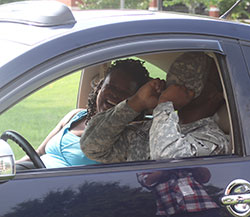 Cars 4 Heroes, a nonprofit that provides free transportation to veterans and active military, partnered with an OSU Institute of Technology class to present refurbished vehicles to two veterans before the 195th Commencement ceremony Friday, August 23. The OSUIT Pro-Tech Automotive Technology class refurbished the cars that would go to the recipients, who were surprised with the vehicles at a dinner just before the students graduated.

Army National Guard Veteran Marquise Debouse received a 2004 Volkswagen Beetle Turbo. After returning home from his deployment in Afghanistan, his own car was stolen. Without insurance or money to replace the car, it became difficult to get to and from work. Eventually, Debouse lost his job and now is looking for work.

“I almost cried a little,” Debouse said. “I really don’t even know the words to say. I'm definitely speechless. I’m going to drive it, a lot. I’m probably going to live in this car for a week!” 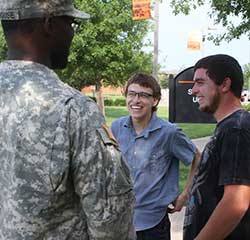 Oklahoma Army National Guard member Elena Brown received a 2001 Oldsmobile Alero. Elena is pregnant and has a daughter who lives several hours away. She was struggling to make it to and from work, attend doctor’s appointments and visit her daughter, due to transportation issues.

“This project really underlines the commitment OSUIT has to veterans,” Dwyer said. “Providing cars to these veterans will immediately and dramatically improve their lives.

“I want to thank all the students and donors involved in making this dream a reality for these two military families. They serve our country, and I’m pleased we have been able to help make their lives easier.”