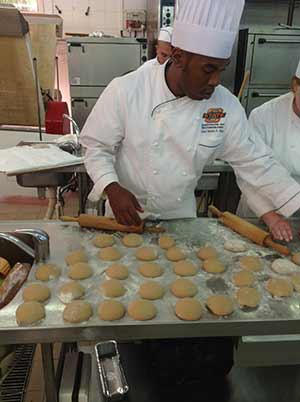 “I’m not in love with this jacket like I used to be,” Ware said, looking down at his chef’s uniform. “What I pride myself on now is that I’m an educator.”

Ware graduated from OSUIT in 1999 and then studied restaurant management at OSU in Stillwater before working at a restaurant in Lawton.

He worked for catering businesses and other restaurants before coming back to his alma mater as a teacher three years ago.

“Being a student here and then an instructor here, OSUIT has always been a part of my life,” he said.

Ware was recently named a 2013 John and Suanne Roueche Excellence Award recipient. The award recognizes faculty and staff from two-year colleges and universities across the country. Ware was the only recipient from Oklahoma.

He was one of five instructors from OSUIT nominated for the honor who were all interviewed on campus last fall.

“Chef Aaron Ware is an outstanding choice as this year’s recipient of the John and Suanne Roueche Excellence Award, and a wonderful ambassador for OSUIT. Being a graduate and now an instructor, he personifies our mission of being focused on the students and their futures,” OSUIT President Bill R. Path said. “His involvement and interaction with all aspects of the OSUIT campus is evidence that he cares deeply about the future of the culinary arts program, his alma mater and his community.”

The other nominees were Jodi Campbell from the Nursing program, and Dr. Maria Christian, Melissa Dreyer and Terry Stamper from the Arts and Sciences Division.

“They’re great teachers. They’ve done a lot for this institution,” Ware said. “That makes it a high honor for me. And this is an award for the department. It’s an award for OSUIT.”

During the three years Ware has worked in the School of Culinary Arts he’s already made an impression on his peers across campus.

He was nominated by Chandra Miller, director of purchasing, for his continued work for his alma mater both in and out of the classroom.

“Chef Ware’s strength is his willingness to serve OSUIT in any way he can. He is compassionate about what we do here,” Miller said. “He is a humble person, prays for OSUIT students, faculty and staff, and often says ‘it’s not about me, it’s about the students.’”

Ware said it’s all part of being a good teacher.

“My teaching philosophy is about relationships. If I don’t have a relationship with a student, know who they are, how am I going to teach them?” he said. “They’re not a number coming through the door. They’re all different. You can’t teach them all the same.”

It’s a philosophy that is taking root at OSUIT.

“There is a culture here. We’re a campus of excellence, a campus of togetherness. I want to work at a place where we’re all pulling on the same rope in the same direction,” Ware said. “People are already starting to talk about our campus. I think we’re on the cusp of a real breakout.”

Ware said he’s never been happier that he chose a teaching kitchen over a restaurant kitchen.

“I love working Monday through Friday. I love being with my kids. I’m having fun. I get to be around food all day and good people,” he said. “I’ve got the best of both worlds. I’m a chef, and I get to teach. I think God put me here for a reason.”