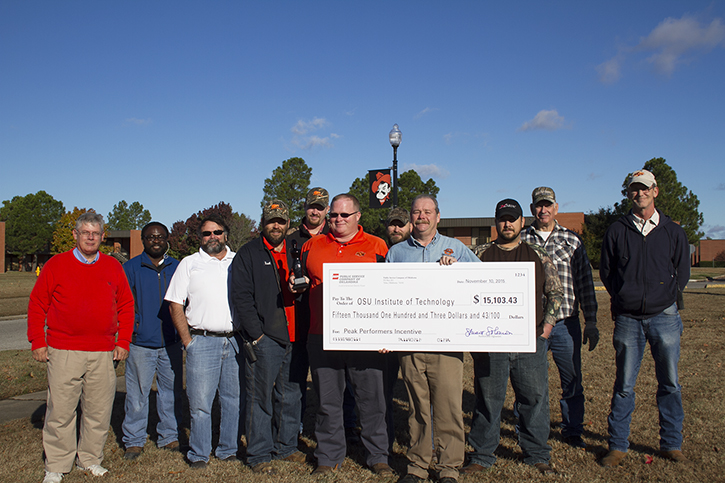 When it comes to saving money on energy costs, a little can go a long way.

OSU Institute of Technology participates in PSO’s Peak Performers program, an energy management service that rewards businesses and organizations for reducing their electricity use during peak usage times.

“It’s everyone on campus that makes this thing work, everyone doing their part,” Teague said.

Because of OSUIT’s success in the Peak Performers program, the Physical Plant department received a rebate of just over $15,000 and an award for highest percentage increase in electricity savings.

Mark Pitcher, Physical Plant director, said a big part of that cost savings came from his team’s lighting retrofit project as well as outfitting some buildings with newer thermostats and that run heating and cooling systems more efficiently.

“You’re not running lights in empty rooms, and you’re not trying to heat buildings that are empty,” Pitcher said, and people on campus are just being more conscious of their power usage. “If you don’t need it, don’t power it up. What people do— or don’t do— really, really helps.”

One way to save on energy costs is to reduce usage over breaks, like the upcoming Thanksgiving break, when students, faculty and staff aren’t on campus.

“Unplugging anything that can be unplugged will greatly help reduce the energy use,” said Teague, and that includes computers, monitors, phone chargers and lamps. Even if it’s turned off, it’s still drawing power from the outlet.

The money saved through these energy efficiency measures, as well as the rebate from PSO, all go back the university’s general fund.

“In addition, with the cut of over $500,000 in state appropriations for fiscal year 2016, OSUIT was able to absorb some of the cut through energy savings,” Smith said.

But even if state funding wasn’t on a downward trend, Smith said operating more energy efficiently would still be important.

“It is the right thing to do for the taxpayers of Oklahoma and the students who attend OSUIT,” he said. “Reducing costs helps to minimize future tuition increases; it makes state funding go further in what it accomplishes; and it’s good for the environment.”

Pitcher and Teague are already looking at ways to improve energy efficiency in the near future, including updating aging systems on campus and installing new systems at the downtown student housing projects.

“We work with our vendors and are looking at new motion sensors for lights. And the housing downtown, even though they’re older buildings there are all kinds of opportunities in terms of lighting, HVAC systems, water systems,” Pitcher said. “It’s another opportunity to save energy and money.”