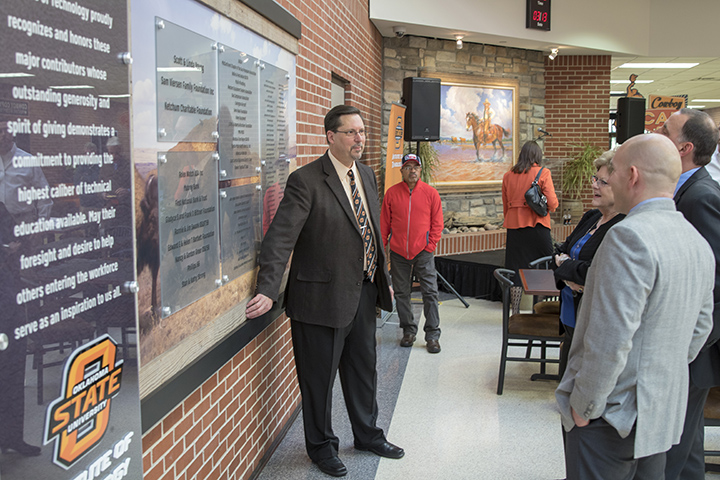 OSU Institute of Technology marked a significant milestone on Tuesday when President Bill Path announced to a crowd of supporters that the OSUIT PROUD capital campaign not only met but exceeded its $3 million goal in just two years’ time.

“We are proud of our industry partners, proud of our faculty and staff, proud of our students and graduates, and proud to have the support and generosity of our community,” Dr. Path said in his remarks. “Every gift, great and small, is an investment in Okmulgee’s future and in Oklahoma’s economy.”

In a reception held March 13 in the Student Union, supporters of the campaign were recognized with the unveiling of the donor recognition wall that lists the names of individuals and businesses that contributed.

“Naturally, when it came time to put a name to this capital campaign, it made sense to call it OSUIT PROUD.” Path said.  “All of you have expressed that pride through your support, and it makes me proud to recognize each of you for your belief and trust in the quality of our faculty and students.”

“These are the people that realize the importance of a school like OSUIT. Each individual or business that contributed to this campaign has more than likely been affected by OSUIT at some point. They realize that this school truly puts graduates to work,” said campaign chairman Mark Mabrey. “We want to honor and thank those who contributed their hard-earned dollars to this endeavor. Their contributions will continue to help OSUIT attract and develop elite talent, and we want to thank them for that.  We are extremely proud to have them as partners in achieving this goal.”

Four years ago, occupancy rates were around 98 percent in the campus’s residence halls, and the need for additional student housing was apparent. Leaders at OSUIT saw an opportunity to not only meet the needs of students but also help the Okmulgee community.

In 2015, OSUIT purchased the two-building complex at 5th Street and Grand Avenue in downtown Okmulgee— the city’s former post office— with the goal of renovating the historic building into a unique student housing facility.

OSUIT President Bill R. Path said he knew it was an ambitious goal to raise such a large amount in such a short period of time.

“We believed in the meritorious nature of our downtown project as well as the genuine need of our students would resonate with potential donors, and they certainly did not let us down,” Path said.

Student housing facilities are notoriously some of the most difficult fundraising projects, Path said, but he was impressed with the local donors who really stepped up in a big way to support the Grand Old Post Office Student Housing development because of its significance to downtown Okmulgee.

“I think a lot of people recognized that a special project like the GOPO— that could potentially do so much good for the community— may only come along once in a lifetime, and they genuinely wanted to be part of making it happen for the town and for our students,” he said.

Mabrey, who is also vice president of lending at Mabrey Bank, said OSUIT has been a large part of Okmulgee for many years, and it was an honor to be able help an institution like OSUIT that makes a difference every day in the lives of its students.

“It’s a tribute to how proud so many are of this institution. Past graduates, the community of Okmulgee, individuals and businesses came together to help OSUIT realize a dream. So many are truly proud to be part of OSUIT,” he said.

Nearly 50 percent of OSUIT students are the first in their family to attend college. Providing additional assistance will lead to more students completing a degree, certificate or career-skills program and entering the workforce.

“It’s really humbling to see how donors are always willing to support scholarships for students in need. Many donors recognize that they themselves benefitted from a scholarship in the past, so they want to do the same for a student in the future,” Path said.