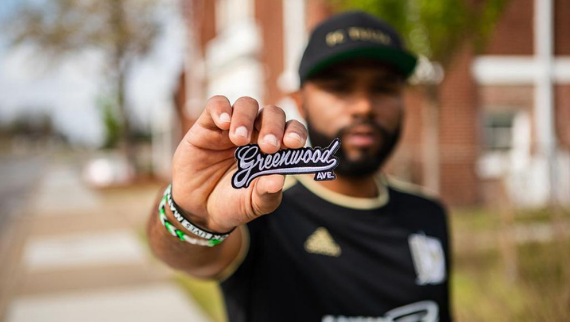 An OSU Institute of Technology alumnus had the honor of designing branding to commemorate the 1921 Tulsa Race Massacre Centennial and related projects for local organizations.

"FC Tulsa was looking for a Black designer to help create a custom patch that could commemorate the centennial and represent the community," Thaxton said. "100% of the proceeds go to the Terrence Crutcher Foundation, whom I had previously donated to through my brand, Greenwood Ave. My name came up through a few of the partners, and the head of marketing at FC Tulsa reached out."

Greenwood Ave., also created by Thaxton, is a clothing brand that celebrates Black entrepreneurship and those who built Tulsa's Black Wall Street.

Thaxton said he wanted to take on the FC Tulsa project because it related to some of his other projects.

"When I was asked, I had just completed the branding for the Historic Greenwood District and initially tried to get that logo to be used. It did not work out, and I thought that it may be a great opportunity to help partner my existing brand since it embodied the spirit of what they were asking for."

In addition to his Greenwood Ave. brand and the FC Tulsa patch, Thaxton also produced and directed video content for the new Greenwood Rising Museum, served as a creative consultant during the museum's development and created the branding for Fire in Little Africa—a Motown Records recording group commemorating the 1921 Tulsa Race Massacre Centennial.

He said that his education at OSUIT was instrumental in preparing him for these important projects.

"I owe so much to my education from OSUIT. I say all the time that my professors taught me so much more than just design, but how to think beyond. We worked hard during our time, were really pushed to pay attention to details, and go above expectations. All principles I still use today."

"I'll never forget my classmates, most of whom I am still friends with today. They not only pushed me to be better then but still do. At our last portfolio review, Mac, James McCullough, the former dean of The School of Visual Communications, said two words that I'll never forget. 'Now what?' I thought I had done some great work, but he continued to push me not to be complacent. His eye for detail, his belief in me to be better, and constant constructive criticism sandwiched with words of encouragement will forever be with me."

When asked what he would say to someone considering enrollment at OSUIT, Thaxton's message was simple:

"I can say that you will get out what you put into it. Give it your all, and you will develop skills and relationships that will last you for a lifetime."