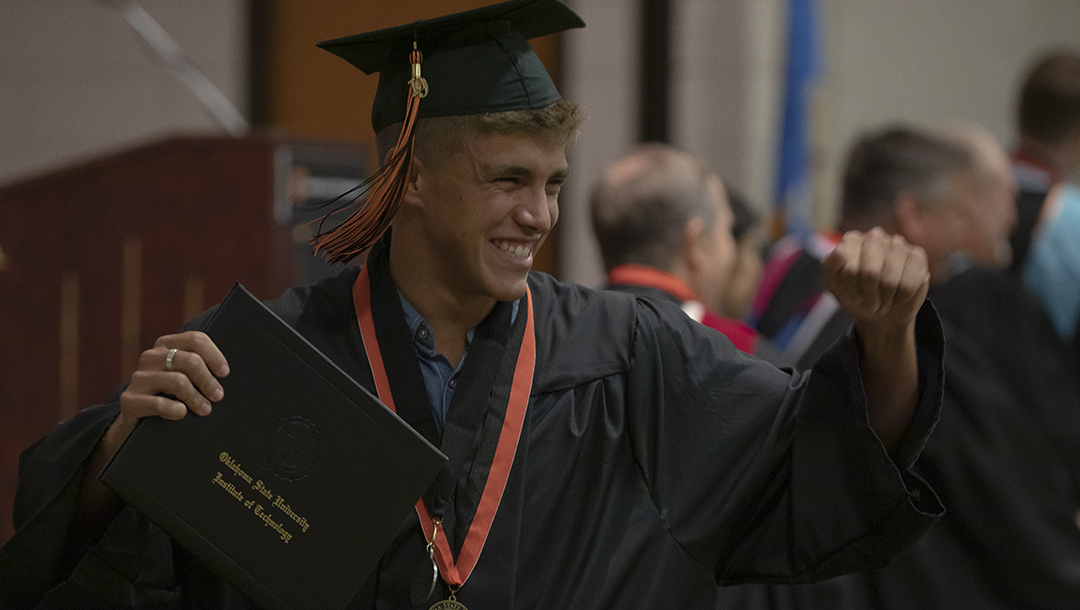 More than 300 career-ready students walked across the stage in Covelle Hall on the OSU Institute of Technology campus Friday night and started their careers on Monday.

Two commencement ceremonies were held Friday, Aug. 23, to recognize the achievements of many students, ready to become competitive members of a world-class workforce and contributing members of society.

Keith O’Rear, senior vice president of Wood Products from Weyerhaeuser, was the keynote speaker for both ceremonies.

He shared his story of how he began in a technical role at Weyerhaeuser over 30 years ago, just as many of these graduates will.

“When I joined Weyerhaeuser in a maintenance job at our mill in Dierks, Arkansas, I never imagined my career path would take so many unexpected and exciting turns,” said O’Rear. “I’ve been a maintenance supervisor, production superintendent, mill manager, region manager, and vice president of Sales and Marketing. And, now I lead our entire Wood Products business.”

“I encourage you to take these three things to heart — become an expert, work unselfishly and take the reins of your own career,” said O’Rear. “They’re a powerful combination of characteristics that any leader would be happy to hire and that will open doors to many opportunities.”

Taking the reins of her own career is exactly what the student respondent at the first ceremony did when her career almost ended before it could even begin.

“A few weeks into my second semester I was involved in a car accident that broke my dominant hand in half. I had to get surgery, and I ended up having to drop out, and I didn’t know if I’d be able to come back,” said Melissa Sadler, Graphic Design graduate. “A year later, I felt well enough to try and enroll again. It still hurt to draw and write, but I loved it and couldn’t picture myself doing anything else.”

Sadler said there were many things she was able to accomplish during her time at OSUIT that she had never dreamed of, including starring in and winning the Okmulgee 48 Hours Film Festival in 2018.

She credited her success to the instructors in the Graphic Design program, her husband and father. “Happiness can be found in the darkest of times if one only remembers to turn on the light.”

Becoming an expert is a path that the student respondent for the 7 p.m. ceremony already has a head start on.

Joshua Smith, a graduate of the Pro-Tech program, just recently completed all eight Automotive Service Excellence tests to become a Master Certified Technician, making him only the fourth student to have completed this during their time at OSUIT.

Smith was no expert when he began at OSUIT and quickly learned how much he would have to apply himself.

“I was fascinated with fixing cars when I got my first car. Once I heard about OSUIT and what it offered, I knew that was exactly what I wanted,” said Smith. “I enrolled in Pro-Tech and got on with the local shop, but things started out rough.”

He had no experience or confidence, but what he did have was hope and will.

“My first internship I realized how inexperienced I was. The second internship came around and it was probably worse than the first. I felt like I was just not going to make it. My boss told me I was costing him money,” said Smith. “That never feels good when you hear that. I was ready to quit, but I didn’t. I kept trying and trying. Everyone encouraged me to stick with the plan, so I did. It worked out perfectly.”

By the third internship, his boss recognized that his hard work and dedication was paying off and he had noticed an improvement.

“That day changed my entire outlook. My mood was boosted, and I kept working harder and harder,” he said enthusiastically. “Back in my hometown I had only heard of one shop and the only thing I heard about it was that it was always busy. I’m going to have a job at that shop whenever I go back home. I have all of my ASE certifications and I plan on becoming the best Tech in McCurtain county or even the state.”

Of the 307 graduates who walked the stage Friday night, 66 percent of them graduated with honors.

As O’Rear said during his speech, this is the beginning of their educational chapter, not the end.

“Be eager to learn more, take on new challenges and grow from every situation,” he said. “Make it your mission to always be learning something new — big or small — so that you never repeat the same year over again. You spent precious time, effort and money earning your degree.”