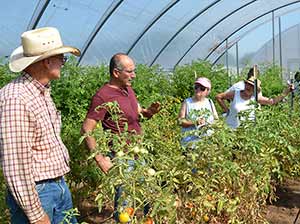 For the first time, OSU Institute of Technology will host the 8th Annual Plasticulture Conference aimed at helping small farmers in the state.

The conference is sponsored by the Oklahoma Department of Agriculture and offers advice, techniques and assistance to those who farm on 40 acres of land or less.

Plasticulture is simply the use of plastics in agriculture, said Micah Anderson, market development coordinator at the department of agriculture and an OSUIT alumnus.

Plastic sheeting laid down below top soil can help retain moisture, keep soil from becoming compacted, stop weeds from growing, and can absorb heat, helping plants during the cold season.

Plastic tunnels over plants can protect plants from high winds as well as retain heat and moisture during the winter.

“This process is the latest way to deal with extremes,” he said, which is the theme of this year’s conference.

The keynote speaker is Itzhak Esquira, a horticulture specialist from Israel who consults and educates farmers from across the world about greenhouse technology and plasticulture.

Attendance at the conference has increased in the years since it started eight years ago and now has about 150 to 200 people register every year.

“We’ve had great participation,” Anderson said, and it seems the number of small farms are increasing in Oklahoma.

“Way back, that’s what everybody had, about 40 acres or so. Time went on and people moved away from the farms and the ones that stayed got bigger and bigger,” but that is starting to change, he said. “Everything goes in cycles.”

The surge in popularity of farmer’s markets and the buy local philosophy has really put an emphasis on smaller, locally owned farming operations, Anderson said.

“You go to the grocery store and you have no idea where your food comes from. Now you can actually buy from the face that grew it,” he said. “We’ve encouraged people─ don’t let the land go.”

Anderson, who graduated from OSUIT in 1978 from the Automotive division, found himself going back to his farming roots when he returned to Oklahoma after working for several dealerships in Florida for nine years.

After starting a small garden on his five-acre home in Oklahoma City, he started working with a co-op and then found out about a position with the Oklahoma Department of Agriculture and applied.

“It’s come full circle. I started a garden in my backyard and it led to this job with the Department of Agriculture,” said Anderson, who now lives in Piedmont working on his small farm there.