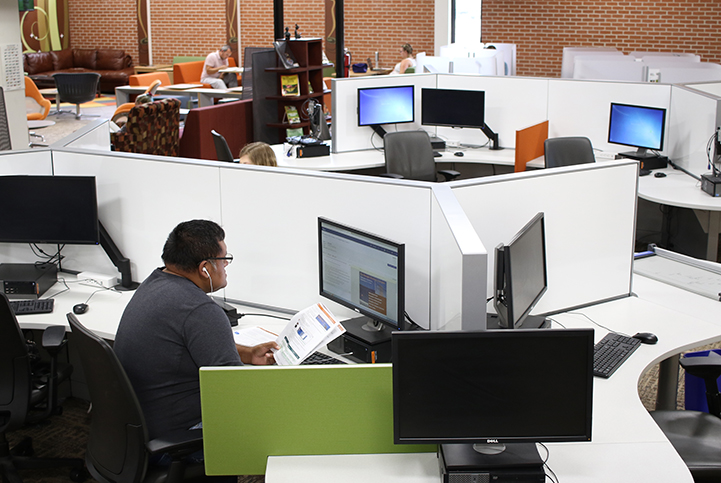 Libraries are changing as technology and the needs of their patrons change, and the library on the OSU Institute of Technology campus is no exception.

“Over the past year, we’ve really tried to redirect our focus to student retention, along with the library’s impact on student learning. The Tech To-Go program has definitely contributed to an increase in traffic, but retention as well,” Duncan said. “Since its inception in the fall of 2016, we’ve circulated 3,763 Tech To-Go items alone, which accounts for about a third of our total circulation.”

The library also extended its hours after the Student Government Association approached the library with findings from a student survey.

I met with them the second week of January, and we implemented the new hours that next week.

My goal every single day I’m here is to ensure we are meeting student needs,” she said.

It’s a sentiment shared with the other librarians on staff including Kristin Pickett, emerging technologies and instructor librarian. Part of her job is coordinating the Tech To-Go program as well as growing the library’s social media presence.

“I try to do fun things through social media and post videos or funny things,” Pickett said.

Duncan said since the library’s social media accounts have increased postings, they’ve noticed more followers and participation in that digital realm and are encouraged by the dialogue that’s started.

“We’re on social media simply because that is where our patrons are and where they tend to get their news and information these days,” she said.

“This is their library; it’s their fees that pay for it. If they don’t come in and utilize it, it’s a waste of their money,” she said.

Pickett is working to inform students that the library offers more than just books and study tables but offers a variety of resources and services as well.

“In the past our information was contained in books, so that’s what libraries offered, but that’s not our main source of information anymore,” she said. “The library is still about getting you the information you need to know, but it adapts. The library isn’t just a place, it’s a service.”