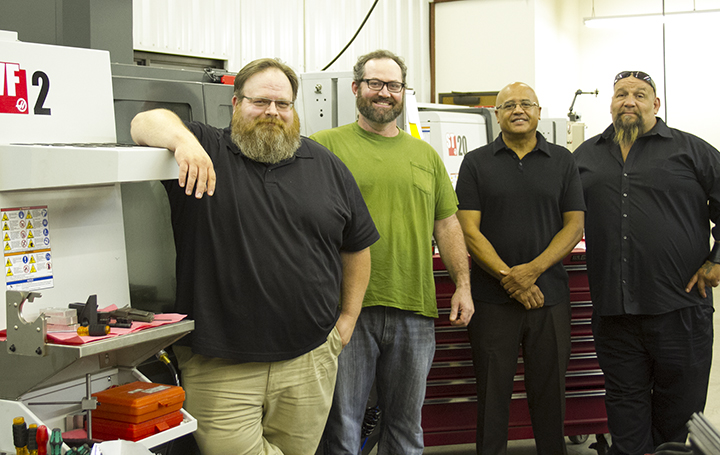 PRYOR— For some TMK IPSCO employees, losing their jobs last year was one of the lowest points in their working lives, but it also afforded them the opportunity to gain more education, more skills and more opportunities to better themselves and their lives.

When TMK IPSCO began laying off employees from its Port of Catoosa manufacturing plant last year, they were given the opportunity to go back to school to learn new skills or start down a new career path through the federal Trade Adjustment Assistance for Workers program.

When a company moves production out of the U.S., the company can petition for TAA for its employees who are laid off due to the move. The federal funding assistance includes job training, job search and relocation allowances, income support, and assistance with healthcare premium costs.

Several of those former TMK IPSCO employees found OSUIT’s Advanced Training Center at MidAmerica Industrial Park in Pryor through their local Workforce Oklahoma office and are now pursuing an Associate in Applied Science in Manufacturing Technologies.

Clay Fullhart was a production supervisor at TMK and was part of one of the first waves of layoffs in May 2015.

“Being a supervisor for almost 20 years, I had to take a general labor job 40 miles away after being laid off. I felt like I was wasting all the things I had learned on the job. When I applied for other supervisor jobs, I kept hearing the same thing— your qualifications are great, but you don’t have a college education,” Fullhart said.

It was even tougher for Robert Dannatte, who was an operator until he was laid off in July 2015. He had to earn his GED before he could even enroll for college courses.

“I had not been in school since 1984. It’s been a change for sure,” Dannatte said, but at OSUIT-MAIP, he’s found a lot of people in similar situations, and the classes aren’t like traditional college courses. “The thing I like about the instructors at OSUIT-MAIP is they have been in the field or are still in the field. And they teach us like we’re in the field.”

Working in the manufacturing industry for so long has definitely been an advantage for most of them, said Cassity Bixby, outreach specialist at OSUIT-MAIP.

“It’s refreshing. We have adult students who already have a foundation. These guys care. They come here and take care of their business,” said Bixby.

“We know how important that degree is. OSUIT-MAIP was the quickest way I could get my degree and go back out there. I’m ready to go to work,” said Davis, who was a machinist before he was laid off in April.

“Students who are coming here due to unemployment, that’s a priority group that we’re trying to serve,” Bixby said.

Utilizing TAA funding and coming to OSUIT-MAIP has definitely opened up more opportunities, even in different fields.

“I wish I had done it years ago, but I don’t know if I would have appreciated it then like I do now,” Fullhart said.

For Kenneth Ward, who worked in quality control until July 2015, coming to OSUIT-MAIP has expanded his knowledge of aspects of manufacturing that he had only observed before.

“I saw what machinists were doing, but I didn’t know what all went into the job until I came here. I’ve learned quite a bit about instrumentation. It fills in the process for me. I learned a lot that I thought I knew, but didn’t,” said Ward, who didn’t even know the OSUIT training center at MAIP even existed before he visited with his Workforce Oklahoma representative.

Dannatte said the opportunity the TAA program gave him to enroll at OSUIT-MAIP means a better future for him.

“It’s changed my life completely. We could go in so many different directions. It’s more opportunities for me. This will help me get into management,” he said. “I love this campus; it’s low-key, and it’s small classes. You get more time with your instructors.”

While initially coming to OSUIT-MAIP was just a means to an end— earn a college degree so he could find work— Fullhart’s goals have changed, as has he, since he enrolled.

“Before I got laid off, I was the guy who had a plan. I knew where I was going to be in five, ten years. When I got laid off, it shook me up for a while,” he said. “Now, coming here, it’s opened up new doors and new fields. I’m looking at different things to do. I’m hooked on design and 3D printing. Now I want to go on and get my bachelor’s degree. Now it’s a new adventure.”