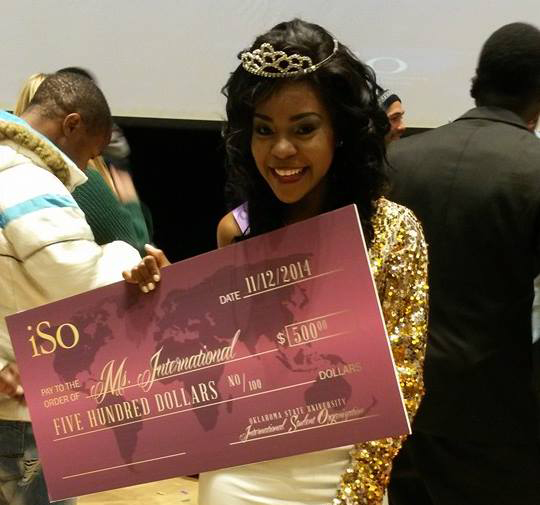 Chitseko, a nursing student, grew up in Zimbabwe before moving to the United States seven years ago. She was attending Victory Bible College when she learned about OSUIT and its hands-on technical education.

She took a few classes over the summer and started in the Nursing program full time this fall semester.

“I love how the teachers are so helpful and kind. OSUIT is larger than my old school, but the classes aren’t crowded. We still get to work with the instructors,” Chitseko said.

“I went to school for business, but after getting in the program I changed directions. I took a nutrition class and it was really interesting,” she said, so she redirected her focus to the family business. “My mom is a nurse, my grandmother was a nurse, so I thought I would try nursing.”

While looking online for available scholarships to help pay for her classes, she learned about OSU’s Ms. International competition for international students that awards the winner a $500 scholarship.

“All the participants were really nice. Just to be in a pageant with people like me was nice. We were all rushing after practice to do homework,” she said.

Chitseko wasn’t a pageant rookie. She was crowned Miss Zimbabwe-USA in 2011 and Miss Intercultural in 2012. With her experience in pageants, she thought she had a pretty good shot at placing at the Ms. International competition, until she met the other 13 contestants.

“Everyone was so talented and so confident. They were all such beautiful girls. I thought Ms. Nepal was going to win,” she said, so she was surprised when her name was called.

“I was so excited. Students in our MISA club (Multicultural Student Association) actually came. It was a real boost to my confidence. Everyone was supportive, it was so nice,” Chitseko said.

The new title gives Chitseko the opportunity to bring awareness to OSUIT’s international student population or other needs on campus.

“I can put on that crown and sash and promote the international program,” she said. “Last year’s winner said it really changed her life. It got her out in the community and she overcame her shyness.”

Chitseko will also be in a position to promote the OSUIT campus as she fulfills her duties as Ms. International being involved in events in Stillwater such as Cultural Night, the homecoming parade and of course, next year’s Ms. International pageant.

“The whole experience opened my mind to the idea that you really can do whatever you want to do,” she said. “A lot of people hold back because they think they can’t do it, but people can do anything they want to do.”