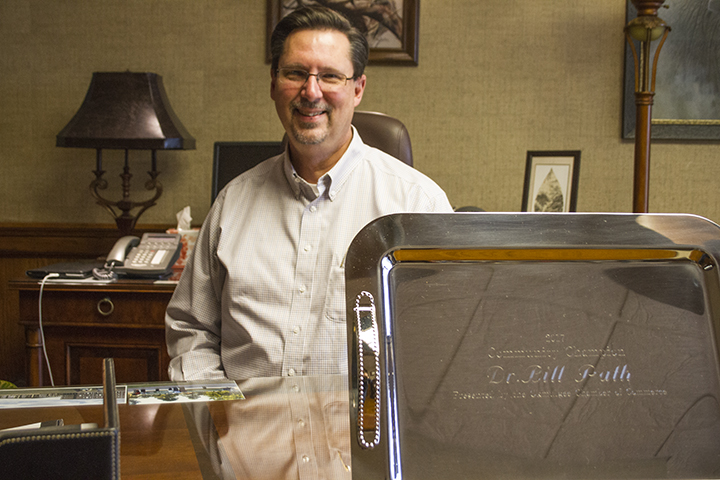 Dr. Bill R. Path, OSU Institute of Technology president, was recently recognized with the Community Champion Award from the Okmulgee Chamber of Commerce.

The honor was given at the annual Chamber Banquet on Nov. 17.

“It was a total surprise to me. We go to the banquet every year, and it was the furthest thing from my mind,” Path said of being recognized at the event.

Rusty Milroy, vice president of Mabrey Bank, sits on the Chamber’s board as the representative for Okmulgee Main Street and was chairman of this year’s banquet. He was also the person who nominated Path for the award.

“His involvement in the Main Street program and Okmulgee Rising and his commitment to downtown and the revitalization of Okmulgee,” Milroy said were reasons for his nomination. “The committee decided to award the Community Champion to him; I just nominated him.”

Kay Rabbitt-Brower is executive director of the Okmulgee Chamber of Commerce.

“I wanted the Chamber to begin recognizing and honoring those individuals who are making a positive impact on our community. But I didn’t want that recognition to necessarily be an annual award,” Rabbitt-Brower said. “That’s why we chose to name it the Community Champion Award to spotlight those who are championing Okmulgee. It will be awarded only when we feel there is someone truly deserving of it.”

Path said it was generous of the chamber to recognize him as the Community Champion when so many do so much for Okmulgee.

“Okmulgee Rising is not the efforts of one person. There are so many people who are unsung heroes working in this community,” he said. “I feel humbled the community and Chamber would award this to me, but I’m very grateful.”

Another big reason for the nomination and recognition is the recent completion of the Grand Old Post Office Student Housing, a three-year endeavor spearheaded by Path. In early 2015, OSUIT purchased a nearly 100-year-old two-story structure that had sat empty for years and renovated it into loft-style apartments for students.

The GOPO grand opening was Nov. 28, and the building’s first student residents will move in on Jan. 3.

“What OSUIT is doing is part of the Okmulgee Rising story, but it’s not the whole story,” Path said. “We are seeing what we started with the GOPO resonating through the town.”

Milroy said he noticed a real concerted effort to strengthen the relationship between the campus and community when Path started at OSUIT in 2011.

“The cooperation that OSUIT has shown since Dr. Path has been there— OSUIT, the Okmulgee Chamber, Main Street, the City of Okmulgee, Okmulgee Public Schools, Muscogee Creek Nation— we have combined our efforts to make Okmulgee a better place to live,” he said.

The partnership between community and campus is an important one, Path said. It’s something he’s learned during his tenure at other colleges and universities.

“I heard from many people that they wished the relationship between the campus and the community was stronger,” he said. “It’s vitally important. As goes Okmulgee, so goes OSUIT. You can’t divorce the campus from the community.”

Path was also no stranger to construction projects. During his 10 years as president at Northeast Community College in Norfolk, Nebraska, he oversaw the construction of 10 buildings, but nothing quite like the GOPO Student Housing.

“There’s something different. The GOPO has struck a chord in this town,” he said. “I have never worked on a project that resonated so strongly with people. The building just speaks to everyone. The entire town is proud of this project, and I think that’s why they wanted to recognize it and OSUIT.”