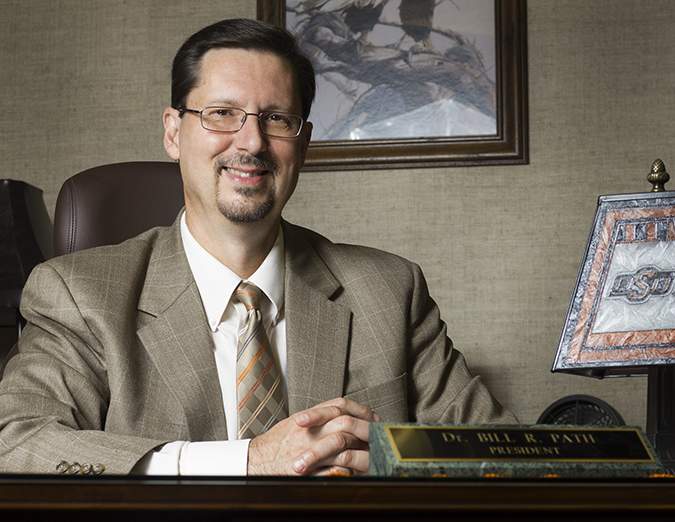 OSU Institute of Technology President Bill R. Path is being recognized nationally for his opinion pieces and blog posts about issues facing higher education and the ever-widening skills gap in the U.S.

A study by Roland King of PhairAdvantage Communications, LLC, analyzed nearly 600 opinion pieces written by nonprofit college and university presidents and created a list of the most published administrators with Path making the list because of his 10 Huffington Post blogs that ran in 2014.

“I was truly surprised when the researcher informed me that I was being included in his list of the top 14 most prolific college presidents for 2014. I really had no idea that what I was doing was that meritorious or unusual,” Path said.

In a release from PhairAdvantage, Roland King said higher education critics have complained for years that college presidents are reluctant to speak out on social and federal policy issues, but that is changing.

“There are a lot of voices speaking out eloquently and forcefully on a wide range of topics, including some of the most controversial issues facing the country,” King said.

While it’s not a university president’s top priority, Path said expressing opinions about policies and trends affecting higher education is something that needs to happen more.

“First and foremost, college presidents must protect the interests of their particular institutions, but they need to be able to look beyond their own institutions as well,” he said. “As thought leaders, we have an obligation to inform and enlighten our constituents and stakeholders about issues facing higher education. Sometimes this means sharing our opinions on national matters.”

The national topics Path writes most frequently about are the skills gap, technical professions and outcomes-focused higher education models, like the one at OSUIT.

“When I first came to OSUIT it became obvious to me that this unique institution in rural Oklahoma had a very real solution to the national skills gap problem, and that solution needed to be shared with others, not just as a means to recruit students but as a public service announcement,” he said. “The skills gap is real, and it can be solved. Using applied learning methodologies in areas of advanced and emerging technologies, OSUIT has been highly successful in placing graduates directly into the workforce.”

Opinions are slow to change when it comes to misconceptions and prejudices regarding the skilled labor workforce as well as career and technical education, but those opinions have to change if people are serious about putting unemployed Americans back to work, Path said.

And while Path has been very vocal about his ideas regarding higher education pathways, in the larger sphere of university presidents speaking out, not everyone’s voice is being heard.

In his study, King pointed out that female presidents make up 26 percent of all nonprofit college presidents, but women wrote only 18 percent of the op-eds studied.

There were also disparities among the types of institutions represented in opinion pieces.

Community colleges, historically black colleges, and special-purpose institutions that focus on specific areas such law schools, medical schools as engineering and technology schools make up more than half of all nonprofit institutions but only account for 13 percent of the op-eds studied.

Path said this could be the result of groupthink among the higher education community.

“It can be difficult to speak out on issues when you believe you are in the minority. We think ‘No one is going to listen to my opinion’ or ‘I might be ridiculed by my peers,’” he said. “If we are going to advance beyond our staid traditions, we need to hear new voices and fresh perspectives. Many of the things I write about are unpopular in higher education circles, but they still need to be said nonetheless.”