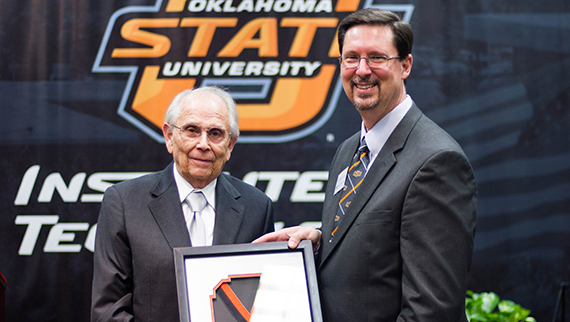 OSU Institute of Technology is remembering and celebrating the life of distinguished alumnus, long-time supporter and advocate for the institution, Mr. Jim Swank, who died April 26 at the age of 85.

Swank was a 1958 graduate of OSUIT's Air Conditioning and Refrigeration program and was the founder and retired president of RAE Corporation.

After serving in the U.S. Army, Swank enrolled at OSUIT while also working at Webster Engineering, a commercial refrigeration manufacturer who had a site in Tulsa. He continued his career at Webster after graduation.

Swank and his business partners decided to start an air conditioning company when Webster announced its move to Ohio, so in 1971 he founded Technical Systems Incorporated, now RAE Corporation, in MidAmerica Industrial Park in Pryor. He retired from RAE in 2000, and his son Eric, also an OSUIT alumnus, was named RAE Corporation’s president.

He was active in his community supporting the establishment of Thunderbird Youth Academy in Pryor and was influential in establishing remote learning sites for Rogers State University and OSUIT at MidAmerica Industrial Park.

“Because of Mr. Swank’s vision to help his alma mater, RAE Corporation has been a long-time supporter of OSUIT,” said Steve Olmstead, dean of the School of Engineering & Construction Technologies. “They’ve provided needed internship opportunities for students going through the ACR program and hired many of our graduates.”

Olmstead also said that RAE Corporation had donated many custom pieces of equipment that students currently use for training, including a chilled water system and rack system, valued at over $20,000.

“These donations have provided great support for both faculty and students,” said Olmstead.

Because of the lasting and influential partnership, a representative from RAE Corporation always serves on the ACR advisory board, a position originally held by Swank. In 2015, Swank was presented with the Distinguished Alumni Award at the OSUIT Hall of Fame ceremony.

"Mr. Swank's lifetime contribution to OSUIT had a profound and lasting effect on generations of graduates entering the workforce,” said Dr. Bill Path, president of OSUIT. “He was a visionary who understood the value of technical education, the virtue of giving to those in need, and whose passion for school spirit and loyalty was unmatched. He was a true friend to OSUIT, and we will always hold that friendship close to heart."