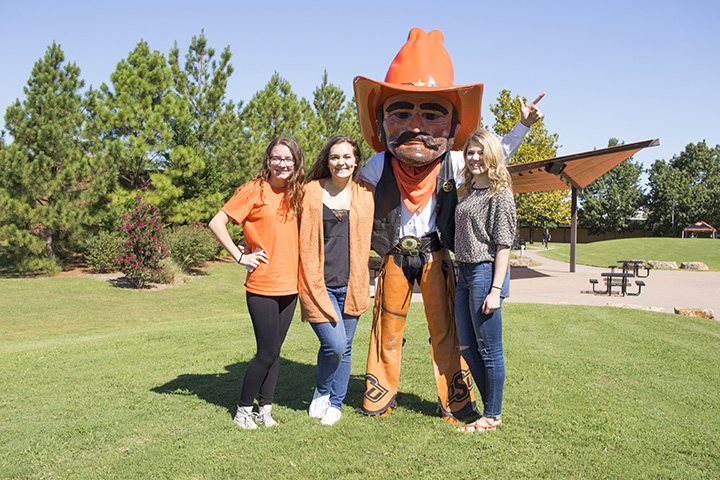 If the parking lots at OSU Institute of Technology seem more crowded this fall, it may be because the campus saw an overall student enrollment increase of 4.4 percent this fall semester compared to last year.

“The continued increases in the enrollment of new students confirms that the message is getting out there that a technical degree from OSUIT leads to full-time employment and a rewarding career with multiple opportunities for advancement,” said Dr. Ina Agnew, vice president of Student Services. “From Academic Affairs, to Student Services, to Fiscal Services and especially our industry partners, everyone was involved in sharing information on the quality of our programs, low graduate debt and high placement rates.”

But the biggest growth isn’t from new incoming students but from returning students.

The average retention rate for two-year colleges in Oklahoma is 52.8 percent, according the latest data from the Oklahoma State Regents for Higher Education.

“We did start making concentrated efforts to increase enrollment,” Path said, and one of those efforts was the formation of a presidential retention task force in the fall of 2015 to identify issues that affect retention and graduation rates and recommend solutions to these issues.

“Recruiting students hasn’t been our problem; it’s retaining those students to graduation where we had room to improve,” he said.

“In an effort to gain complete understanding of the roadblocks to success encountered by OSUIT’s students, the task force members made it a priority to develop a full 360-degree perspective of the issues at hand,” Grammer said.

The task force used data provided by the Office of Institutional Research, feedback from current and former students as well as feedback from deans, faculty and staff.

The group also spent an extensive amount of time investigating best practices, innovative strategies and key interventions utilized in support of retention by other institutions.

The task force presented their findings in the spring of 2016 with an extensive list of recommendations on how to increase enrollment and student retention, Path said.

“We looked at scholarships and tried to gear more toward sophomores and returning students,” he said. “We looked at an early warning system that would identify students who were doing poorly. The earlier you can identify these students at risk and get them help, the better the chance of them staying in school.”

Another recommendation that seems to have made a big impact with students is just personal connections.

“Instructors, people in the admissions office, our Student Services staff making phone calls, sending text messages. That more than anything else has turned those retention numbers around,” Path said. “We’re doing a better job of connecting students in need with resources both on and off campus. We’re doing a better job identifying needs both academic and personal.”

OSUIT’s retention initiatives have involved a considerable amount of time and effort from the entire campus community, Grammer said, and she’s grateful for everyone who played a role in improving the university’s retention and enrollment numbers.

“Our students place their trust in us that we are going to provide them with a valuable, meaningful learning experience that positions them for success in their future employment or academic endeavors,” she said. “We have a moral obligation to these students to provide them with that learning experience, as well as with the support and resources they need to be successful while at OSUIT.”

Agnew said student retention is part of OSUIT’s mission to prepare and sustain a student body as competitive members of a world-class workforce.

“If we don’t retain students to graduation, we fail in that mission,” she said. “We are pleased to see our efforts to redesign curriculum; improve instruction and student services; and identify additional in- and out-of-class support for students is starting to pay off in a big way.”

Path said he’s thankful for the enrollment increase at this time because it was needed as funding for higher education continues to be cut.

“We can’t control our state appropriation. The most controllable part of the budget is enrollment and tuition,” Path said. “We’re just wanting to fill the empty seats in the classes we’re already offering.”

Grammer said retention initiatives are still being implemented so the full impact of those recommendations hasn’t been determined yet, but that doesn’t mean the problem is completely solved.

“It is vital that we continually look for ways to improve upon our academic programs and student services in ways that support not only retention, but most importantly, the success of our students,” she said. “Retention will continue to be a key priority for OSUIT, and the campus community will continue to focus its collective efforts on identifying and removing barriers to student success.”