OSUIT Shows Its Commitment to Veterans

OSUIT Shows Its Commitment to Veterans 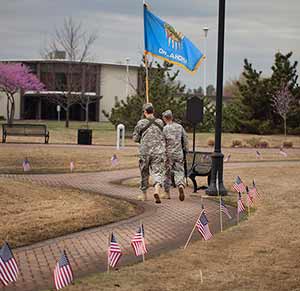 On Monday, Nov. 11, the OSU Institute of Technology campus is joining together with the Okmulgee community to honor veterans and active military with a parade, flag ceremony and reception as part of the university’s Veterans Day celebration.

“This parade serves as an opportunity for the community to honor the brave men and women from every generation who have risked their lives to preserve our freedom,” said Chenoa Worthington, OSUIT’s scholarships and veterans’ benefits coordinator at OSUIT.

OSUIT’s history is intertwined with the military. Before it was a school, the campus served as a military hospital for those who fought in World War II. In 1946, Oklahoma State University took over the property and turned the facility into a technical and vocational school for veterans so they could re-enter the workforce.

That mission hasn’t changed much in almost 70 years.

The applied technology environment at OSUIT is a perfect fit for many veterans who enjoy hands-on learning and hands-on work. Right now, about 130 veterans are enrolled and utilizing their G.I. Bill benefits at the university.

Once again this year, OSU Institute of Technology was named a Military Friendly School, but the university aims to go beyond that and be military committed.

In addition to a variety on-campus veterans services and a Student Veterans Association chapter, OSUIT will soon launch Military Crosswalk, an online feature that assesses a veteran’s military experience and suggests possible programs of study offered at the university that best align with those skills that veteran has already learned.

Hosting Veterans Day events is another way for the university to show its gratitude for the service and sacrifice of veterans and active military members.

“The parade is a reflection of our community’s sense of patriotism, community spirit and respect for the American flag,” Worthington said, and SVA members will be handing our flags to parade goers. “It is important to us to honor our veterans and their service appropriately and to demonstrate to children in the crowd that military service is both noble and central to our country’s continued success.”

Worthington said all veterans are invited to participate and ride in the parade in vehicles provided by OSUIT. Local businesses and organizations can also still submit a parade entry form.

After the parade is a flag ceremony with remarks from President Bill R. Path and a guest speaker at Covelle Hall on the OSUIT campus.

There will also be a reception with refreshments just before noon following the ceremony.

What: Veterans Day Parade and Celebration

Where: Parade starts at the Motor Pool on the corner of Miller Drive and Mission Street, continues south on Covelle Boulevard and then east on First Street before ending at Covelle Hall.

When: Parade kicks off at 10 a.m., flag ceremony and keynote address at 11 a.m., with reception immediately following just before noon.

Get involved: All veterans and invited to participate and ride in the parade in vehicles provided by OSUIT. Call Beverly Dennis at 918-293-4916 about riding in the parade.