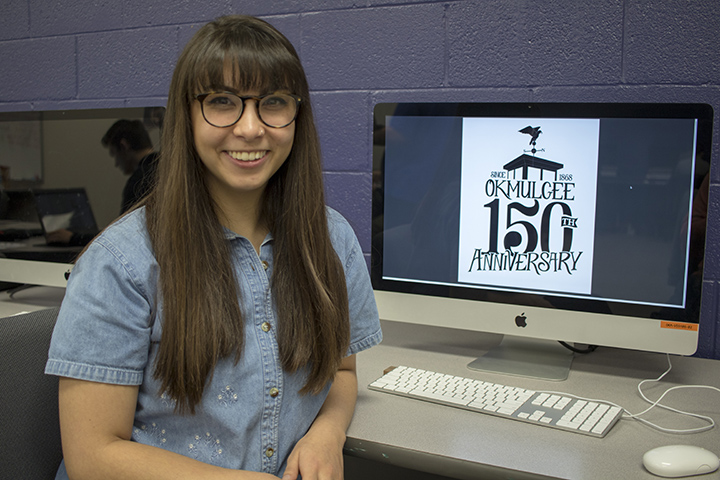 The year 2018 marks Okmulgee’s 150th anniversary—its sesquicentennial—and OSU Institute of Technology is joining with other community organizations in the celebration.

School of Visual Communications students in an advertising class worked for about three weeks last semester creating a visual identity to commemorate the anniversary of the city’s formation.

At the beginning of the spring semester they presented their logo designs to the Okmulgee Sesquicentennial Committee comprised of representatives from Okmulgee Times, City of Okmulgee, Okmulgee Main Street, Okmulgee Chamber of Commerce, Okmulgee Tourism, the Muscogee Creek Nation, OSUIT, and the Okmulgee Area Development Corporation.

The design by Erico Smith, a graphic design student, was chosen as the winner.

“When they picked mine I thought ‘I’m going to make an impact on this town,’” said Smith’s whose design features one of the most iconic, and historical, buildings in Okmulgee. “The biggest touchstone is the Creek Council House.”

Smith’s logo centers on the cupola of the Creek Council House, which sits at the heart of downtown Okmulgee. The stone building that now sits along 6th street was constructed after the original council house, which was built in 1868, was destroyed by fire.

“We liked the design because it showcased the Council House cupola, which is where the story began— with the building of the Council House even before Okmulgee was established,” said Sharla Stephenson, one of the committee members who decided on the winning logo. “The Muscogee (Creek) Nation leaders saw the vision and dreamed about a beautiful place to gather, live and thrive as we are still seeing and doing together today 150 years later.”

“We are also planning on various 150th celebrations throughout the year, some sesquicentennial merchandise like t-shirts to wear and show our pride, as well as other various exciting things to be announced,” she said.

Smith said she was excited and surprised her design won, and her fellow classmates who also presented logos have been supportive.

“All of us are really open with sharing with each other. We feed off that feedback,” she said. “We’re competitive, but we’re not cutthroat. It makes us better designers.”

The logo project was a way for Visual Communications students to invest their talents in Okmulgee, which can develop a pride in the place they are learning, gathering and may even want to stay and start a career, Stephenson said.

“OSUIT has been a long-standing partner of all things Okmulgee. They continue to lead the way in showing how great partnerships can benefit from each other and how communities can succeed when bringing their gifts and talents to the table. In Okmulgee, everyone has a place at the table,” she said.

Smith said it’s a strange feeling to see something she made come to life on such a large scale.

“I’m glad it’s going to have a positive impact. Okmulgee is a sweet town, and I’m glad I get to be a part of that,” she said.