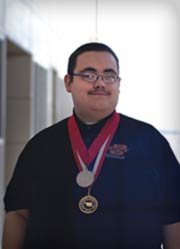 Because of the hard work Groeneveld has put into his schoolwork, his commitment to his academic organizations and his thoroughness in applying for scholarships, he is the recent recipient of three different state and national honors.

“It is definitely an honor to receive each of those awards,” Groeneveld said. “I am very passionate about leadership and service, which both tie into each and every one of those recognitions. Those scholarships are a tremendous help in paying for school and academic-related activities.”

In addition, he was also named to the Oklahoma Association of Community Colleges All Oklahoma/All USA academic team. OSUIT nursing sophomore Miriah Million also was named to the elite team. In fact, Groeneveld and Million are two of just 38 people in the entire state of Oklahoma to be a part of this academic team.

“To have these two students both earn a place on the All-Oklahoma/All-USA academic team is an honor and a huge accomplishment for our university,” said Ina Agnew, OSUIT vice president for student services. “We are proud to have these students at OSUIT, and their tenacity about their education is a demonstration of just the kind of student we want associated with OSU Institute of Technology.”

Groeneveld learned of these opportunities through his active service with the OSUIT chapter of the Phi Theta Kappa Honors Society, a Five Star Chapter, serving as the vice president of scholarship.

“Our advisor, Lee Lawson, kept telling us to take our time and do well on the essays – and there were a lot of them – because doing so would give us the best opportunity to get a scholarship, which were few and far between,” Groeneveld said. “I tried to take my time and do my best.”

In fact, Groeneveld credits these awards and much of his success at OSUIT to Lawson’s efforts.

“Lee Lawson has been a tremendous asset to me,” he said. “He has encouraged and helped me along the way in many ways. Any time I have an issue or problem, he is there to help me, encourage me, and lead me along the way.”

However, Groeneveld says his true source of strength comes from a higher authority than a professor.

“To be recognized for my achievements with these awards is, above all, a blessing from God,” Groeneveld said. “He has enabled me to go to college, do as well as I have, and be involved in activities such as I am presented with in PTK. None of this could have been possible without Him.”