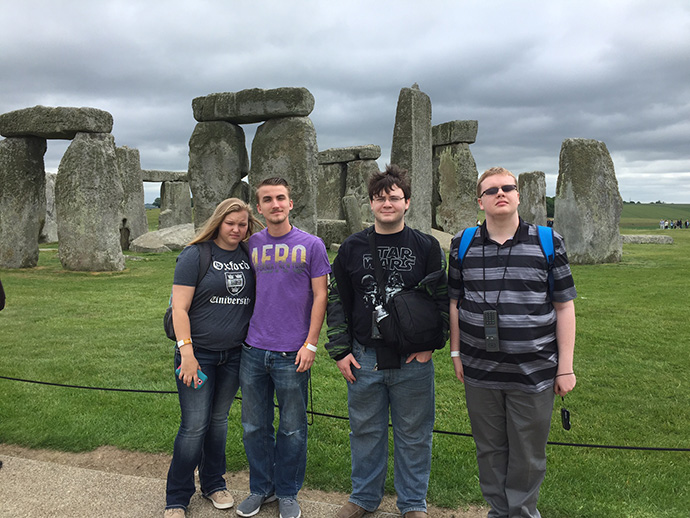 Three countries in 11 days— that’s a lot of history and culture to take in. But four students and a faculty member from OSU Institute of Technology took on the challenge and recently returned from their trip through the British Isles.

The study abroad trip included time in Ireland, Wales and England. The students who participated earned humanities credits and a lifetime of memories.

Justin Isbell, a School of Culinary Arts student, said he had never been on a trip like this before, so he jumped at the chance to travel internationally and see such history.

“It was finally a chance to see Ireland and London, a chance of a lifetime. If you have that chance, you have to take it,” Isbell said.

The trip was just as exciting and memorable for School of Arts & Sciences instructor Jacqueline Anderson.

“A textbook does not compare to study abroad. Textbooks can only tell you things. On the trip you get to touch things and see things,” Anderson said. “The experience is awe-inspiring.”

The small group from OSUIT was joined by students and faculty from Tulsa Community College and Brescia University in Kentucky. Their first stop was a road trip around Ireland.

“All the fences are made from stone. Every field of farmland was this beautiful field of emerald green. It was like looking at a giant green quilt,” Anderson said.

After Ireland, the group took a ferry across the Irish Sea to Wales and then to England.

Isbell said he was impressed by just how old, and how preserved, some of the buildings are in the countries they visited.

“There are still really old buildings dotting the landscape. They’ve kept some of the buildings that have great historical significance,” he said. “They respect history there so much.”

Anderson said every place they went was an opportunity to learn something.

“Every single thing we did was educational. Our tour director has been doing tours since 1996. He was just a plethora of information,” she said. “We learned about literature, architecture, history, business, economics, art. The students learned more than they ever thought they would.”

Isbell said before this trip he never knew about the Roman Baths in England or just how old Stonehenge was.

“Going there, you get to experience the culture. Seeing the oldest of the old. Actually seeing real-life castles, seeing the stonework, going to Stonehenge,” he said.

Alongside the historical education they received, the students also got a bit of an education in cultural differences.

“There were some moments I was kind of caught off guard,” Isbell said, like the fact that ice and air conditioning are rare in the United Kingdom. But being a culinary student, he did try some of the local delicacies.

“Blood pudding— I actually tried it, and I enjoyed it. It’s not really like pudding. They taste more like a sausage actually,” he said, but there were some things that are just better at home. “The burger, we do it better.”

Isbell had such a good experience with this study abroad trip it has sparked an interest in more international travel to places like Germany and Japan. And he encourages other students to take advantage of future study abroad opportunities.

“I don’t want to push them because I know how expensive it can get, but if they have that chance, don’t let go of it. It’s a once in a lifetime opportunity,” he said.